If you read here often enough over the last 3 years, this is nothing new as I have had a campaign to require Data Sellers, all of them, banks, companies, brokers, etc. to have to register and buy a license.  Talk about an industry where there’s no transparency outside of the credit reporting area, this is it.  Data Selling has reached epidemic levels and we need to know as consumers who’s selling data, what kind of data do they distribute and who do they sell to.  This is the campaign and in reality is only step one that would be required to 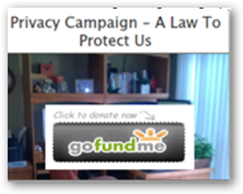 regulate who gets to sell our data.  It’s not stopping it but rather making some kind of accountability possible.

As consumers we’re screwed and I can’t put it any other way as we are the free labor source here that suffers and has to go through the agony of fixing all the “flawed data” about us that gets sold as well.  Flawed data gets the same price as good data and it’s all mixed in together.  You get sold once, then you get re-queried with another data base and that becomes a new data base for sales and it goes on and on and on.

I have been working on this for about 3 years now and need some help so if you can chip in $5.00 or more to the cause.  I have tons of emails sent to the FTC and some to members of Congress.  I’m just flat out tired of 3 years of privacy experts not doing step one and that is to create an index on who they all are.  This is data base 101 folks.

After such, then other potential laws could be addressed and considered.  This is the missing puzzle piece and just last week the state of California voted down a weak version of trying to prohibit data selling, it’s needs a process and the group needs to be identified no different than a driver’s license if you want to look at it that way.  We can drag folks from underneath the carpet like this company, e-Scoring who sells credit information about all of us all the time, and it’s a secret.  We don’t know what they sell and to who.  This was chapter 42 of the Killer Algorithm series.

e-Scoring Credit Algorithms Invisible To Consumers Used to Market and Evaluate, Does Not Fall Under Federal Law And Such Are Used by Insurance Companies - How Will This Work With Exchanges –Attack of the Killer Algorithms Chapter 42

Like I keep saying, this is going nowhere until all are identified and why all privacy efforts have failed and there’s no developers out there going to spend their time trying to create some magical algorithms either, that’s the real world folks.

So again, imagine yourself in a world to where stock broker identities were a secret, along with real brokers being a secret, does that make sense?  Of course it doesn’t and neither does having Data Sellers and the kind of data they sell being a secret.

Please chip in if you can and I’ll keep at it and you can read the campaign on where I also tell you about insurers already buying your credit card information.  Would you not like to have a list of everyone Master Card sells your data to?  I would so at least when there’s errors I can identify where the errors originated.  You can always find the link on the right hand side of this blog.  What do you have to lose?  Nobody’s done a damn thing to date as none of the experts are using any “data mechanics logic” which you need to get to step one here to create a solution.

Please donate and help me help you and me:)

Read the campaign and it will be updated with my progress!  I’ve been at it for 3 years so not stopping now:)

Monday, July 14, 2014
Medically Related , My Commentaries , Other Items of Interest