There’s a lot to this story and first of all the machine shop in Temecula is now closed for one and it was a shop that made part for sail boats so there’s a big difference between boat and humans I would say.  This sounds like some thing that would have occurred over the border, but nope right here in California.  Also the former machine shop owner actually sued Spinal Solutions for 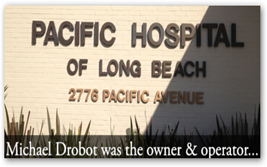 $29k and won so obviously he had a contract and you would think with the name Spinal Solutions that could be a clue as to what the screws were for, but maybe not if he needed the money as a small machine shop.

The FDA got in on it in 2012 with citing Spinal Solutions for a number of item related to quality and put a recall in place because patients who had the devices were having problems with breakage and more.  When you have a sales rep from a spinal implant company, well that might be another clue something fishy is going on.

In April a Hospital Executive, Michael Drobot pleaded guilty to fraud, and of course he lived very well in affluent Corona Del Mar, where doctors involved in fraud of late seem to live.  Drobot was the CEO of Pacific Hospital of Long Beach and has another court date coming up.  This is a dangerous CEO, or ex CEO of a hospital.  He even bribed a State legislator to help keep the kick back scheme going.  So we had two things going on here, knock off spinal screws and CEO working kickbacks to get doctors to refer patients to the hospital for the procedures.

Insurance companies of course too were defrauded in the process.  Drobot was paying up to 15k for a referral for patients that required surgery.  In the midst of all of this it was determined that some innocent hospital employees were terminated and a pool of $6.5 million was created for them.  Now there are patients that have harmed, last but not least and of course some are suing as they should with something like this that is so obvious and that is straight out fraud.  One case involves a Dr. Jack Akmakjian using fake screws as he was paid to do so with a kickback.  The California Medical board is also after the same doctor for over prescribing drugs and injecting patients with unsafe amounts of steroids.

The owner of Spinal Solutions, Roger K. Williams is also accused of passing off the knock off screws as FDA approved devices and the owner is said to have destroyed all the records of where the spinal screws were made.  Williams has also filed bankruptcy claiming 12 million in liabilities and the court rejected it because Williams failed to disclose his ownership of a second airplane and a second Harley Davidson, so no you don’t get to keep some this stuff.   What horrific story.  Pacific Hospital has new ownership and is now owned by College Health Enterprises.

Molina Healthcare, a managed care insurer , said it will form a separate business unit to manage College Health's acute-care services at Pacific Hospital.  The hospital has over 700 employees and Molina said they would keep at least 300.  BD

Doctors in Southern California have implanted counterfeit screws and rods, ginned up in a small machine shop, into the backs of thousands of injured workers, according to lawsuits filed throughout the state. 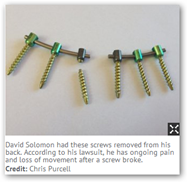 rides, while middlemen and hospitals profited by wildly inflating the cost of the screws, according to one suit filed in Sacramento.

According to the lawsuits, Spinal Solutions asked William Crowder, owner of Crowder Machine & Tool of Temecula, to make the rods and screws.

Thomas Mansor, an independent contractor who worked for Spinal Solutions and attended surgeries with their products, said the allegations sound “bogus.” Mansor said he went to Crowder’s machine shop for repairs on tools like screwdrivers. But he said Crowder didn’t have the equipment or capacity to churn out the spinal implants.

Crowder sued Spinal Solutions last July, saying the firm owed him $29,900 “to machine, repair and prototype” tools for doctors. Crowder attached a one-year, $50,000 contract with the implant firm to his suit. Crowder won a judgment against Spinal Solutions because it did not respond to the suit.

Trent Northcutt, chief executive of Aurora Spine in Carlsbad, said devices like rods and screws are relatively simple to make. But for them to be designated as surgical grade requires FDA approval, biomechanical tests and liability insurance that add to the costs. Northcutt said he briefly dealt with Spinal Solutions but found its products inadequate.

Friday, July 04, 2014
Medically Related , My Commentaries , Other Items of Interest