If you have been following along here for a year or two there have been all kinds of developments related to MMRGlobal related patent infringements and some big names have settled such as Walgreens and Cerner.  We don’t get to know what they are as the settlemens are part of the agreements in most cases.  We do know that Drugstore.com which is owner by Walgreens 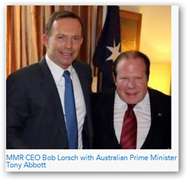 will begin shortly selling MMRGlobal’s personal health record online and soon the PHR “in a box” will arrive on retail shelves.

In addition, Bob Lorsch met with the Prime Minister of Australia and I’m not sure if that is connected with the licensing or not but hey who doesn’t like to meet a prime minister.  You can see from the clip of the press release below that MMR patents go beyond just the US.

Claydata is a leading Health IT company based in Sydney, Australia.  In addition I see mention of 4medica medical records here as well and MMRGlobal and 4medica as I have written before are involved with some lab integration projects as well.  Now I guess the next news comes when when court is back in session in the US with some of the other major patent cases still in the works here.   BD

LOS ANGELES, CA and SYDNEY, AUSTRALIA--(Marketwired - Jul 7, 2014) - MMRGlobal, Inc. (OTCQB: MMRF), through its wholly owned subsidiary, MyMedicalRecords, Inc. (collectively, "MMR"), and Claydata® today jointly announced the signing of a patent license agreement. Claydata, headed by CEO Joseph Gracé, M.D., is a leading Australian health information technology provider based in Sydney and provides its eHealth products and services to a number of healthcare organizations from over 800 referring doctors, many of which utilize Personal Health Record (PHR) services from Claydata that will fall under the license agreement. The agreement was signed following a week of meetings with the private sector and Australian officials, including Prime Minister Tony Abbott, in connection with a program designed to generate revenue in Australia through a private sector business cooperation initiative between the United States and Australia.