You may or may not remember this back in 2011 but 2 fans from Los Angeles beat up a San Francisco fan.  The 1.2 million is for what is not covered under the man’s personal insurance.  That’s a lot of money 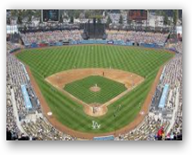 and after being brutally beaten and spending time in LA, he was transferred to San Francisco where he was treated for a concussion for several months.  He is a father of 2 and ironically a paramedic by profession.  The case accuses former Dodger owner Frank McCourt of letting securing fall to unacceptable levels at the stadium and thus there was nobody there to take any action to stop the attack.  Not too long ago the LA Clippers had to chip in so their coach could have surgery for prostate cancer when the owner of the team declined coverage so it’s a pretty crappy world we live in sometimes.  BD

The Los Angeles Dodgers are being asked for a $1.2 million reimbursement by San Francisco General Hospital for extensive brain trauma care given to Bryan Stow, according to reports.