First of all the abstract funding states neither the NIH nor Coca-cola have any interests (in other words it was not completed for any particular case).  I’m sure the NIH might find this abstract of interest as would many who are involved in clinical trials for one. It goes into some pretty extensive detail and even beyond what I can explain in portions of this so

I have captured a couple images here that are easy enough to understand just to show that there is a method now to use to look for P Values that may have been “fiddled with”.  If this is making you uneasy, check out the link below with the PLOS One Journal study why the fear of math makes you feel pain:)  It’s a real study but at some point it’s probably in the best interest of all to overcome just a little bit of the fear factor as those who don’t fear math create formulas and algorithms to take your money in the financial world.

Everything is context and this video below will help you understand the vary basics of P Values and it’s in layman’s terms and is done very well.  Professor Siefe by the way wrote the book “Proofiness, the Dark Arts of Mathematical Deception” and what better person to speak on this topic.  You can always find this video on the Quack on the left hand side if you ever want to come back and view it again, as it’s there with a couple of other educational videos done by people smarter than me, but explain how code and math can lead to Algo Duping.

Here’s one more which gives a very simple example of the P Value in layman’s terms so after watching this you might think twice about all the studies you see in the news and wonder, “What is the P Value” especially when you see all the ones about coffee, etc.  So again this is good that FINALLY the spoof on values and numbers is finally getting some real attention, otherwise we all go crazy.  BD

“Much has been written regarding p-values below certain thresholds (most notably 0.05) denoting statistical significance and the tendency of such p-values to be more readily publishable in peer-reviewed journals. Intuition suggests that there may be a tendency to manipulate statistical analyses to push a “near significant p-value” to a level that is considered significant. This article presents a method for detecting the presence of such manipulation (herein called “fiddling”) in a distribution of p-values from independent studies. Simulations are used to illustrate the properties of the method. The results suggest that the method has low type I error and that power approaches acceptable levels as the number of p-values being studied approaches 1000”. 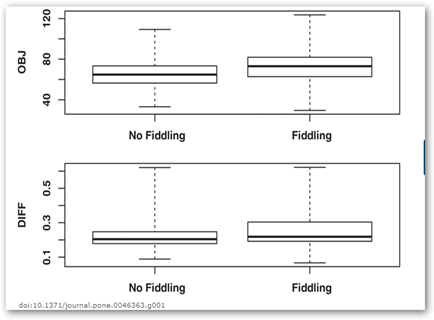 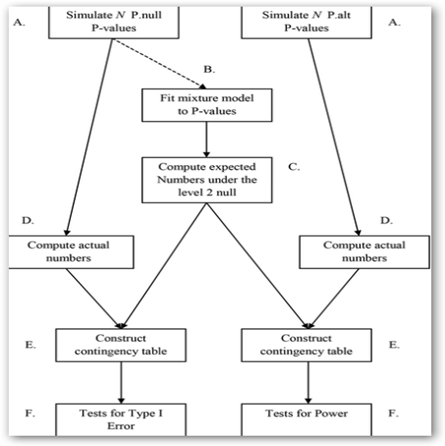 “Our proposed method involves examining the distributions of p-values reported in collections of literature to detect the inappropriate manipulation of statistical analyses to produce p-values that appear to be significant when the initial analyses produced results that were nearly, but not quite, statistically significant. The focus of the proposed tests is to determine whether there is a noticeable pattern in the number of p-values between 0.05 and 0.075 versus those between 0.075 and 0.1 (any intervals of equal length could be used). P-values are assumed to have been collected from N independent studies. As a random variable, a valid p-value has a uniform distribution on the interval 0 to 1 under the null hypothesis, and it has a distribution that should be monotonically decreasing on this interval if the alternative hypothesis is true (see [6] for more discussion of this). Thus, if no fiddling has occurred, there is an “expected relationship” between the number of p-values between 0.05 and 0.075 and those between 0.075 and 0.1. If this relationship is not what is expected, then there is evidence that fiddling has occurred among the studies collected for analysis” http://www.plosone.org/article/info:doi/10.1371/journal.pone.0046363?imageURI=info:doi/10.1371/journal.pone.0046363.g001#abstract0