City of Houston New Health Insurance Plan Not Saving Money, Costing More–It’s Going to be Hard To Save Money With Health Insurance As Economics Change and Financial Algorithms Continue to Shift Money

This is just one example and there will be more and yes there are obvious areas where savings can be had, but we’re getting down close to the end of the barrel and the only way to save money beyond that is to cut services for patients.  They did make a change to a “self insured” model and you can listen to the video and that didn’t have any impact.  They are a year and half into their new contract and have about the same to go, so they will look at it again soon I am guessing.  Certain elements have rising costs and everybody has those and drugs and devices go up in price as well.  So after all the administrative changes and time, no money being saved.  They moved from Blue Cross To Cigna on a self insured model.  One item they did note though is the higher cost for preventive care.  We know that always costs a little more but hopefully keeps some of the big bills away with care before it gets to that point.  Last year in 2011 at the TED conference Bill Gates made a few statements in looking over municipality budgets and said “where did you get those numbers” and not this case here.  He identified 3 points that need to be addressed in healthcare that we need now…and here they are.. 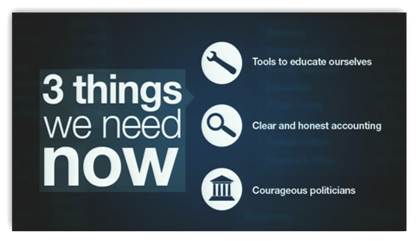 I think we are gathering a lot of tools but the second one might be next to impossible as we are all duped from the banks, insurers on down with complex business models designed for profit and the 3rd one..well we might be getting closer on a few of those.  BD

It was a big fight a year and half ago for the city to switch from health insurance policy to another. But now that they've actually made the switch, they're not sure it actually saved anyone money.

Eighteen months ago, the city switched from a Blue Cross Blue Shield insurance plan to a Cigna managed self insurance plan. It was supposed to save the city money and improve service.

But more than a year later, it turns out not only are employees paying more, but the city isn't saving nearly as much. In fact, they're bringing in $17 million less than what they budgeted for. http://abclocal.go.com/ktrk/story?section=news/local&id=8868845