A couple weeks ago it was the NBA joining forces with Cerner and this week we have the NFL working with e-ClinicalWorks for an EHR for the players.  There’s always plenty going on at e-ClinicalWorks and it was just a couple months ago they announced their “Join the Network” plan and will be expanding Peer to Peer sharing via the NHIN network.  Now when the NFL is up and going with e-ClinicalWorks this means that the doctors within the network could set up to share and receive patient records from other doctors using the system too.  The patients however, will still decide how and where their records will be shared and will have access on smartphones.

e-Clinical has probably been one of the most aggressive medical record companies with using aggregation and integration with other systems, such as HealthVault for one for PHRs.  Now all players will have a record that can be accessed by team doctors anywhere and the information in the records will also work with research areas to perhaps even build some better helmets in time.  It will take about 2 seasons to fully implement the system.  BD 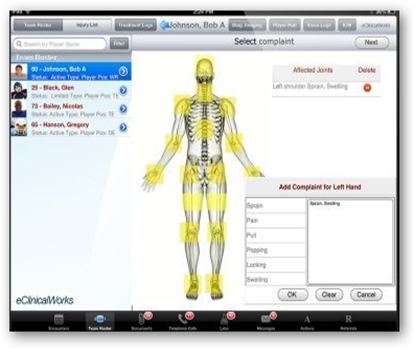 The National Football League is kicking off a league-wide effort to digitize health records. The NFL will use eClinicalWorks' electronic health record (EHR) platform to streamline coordination of care for players.

In addition to typical EHRs, which include information on patient medical conditions, digital records for the NFL will help doctors and trainers track players' rehab and physical therapy, Navani told eWEEK.http://www.eweek.com/cloud/nfl-to-use-ehrs-for-care-coordination-injury-tracking/