This took place in France and the video is in French but English text is included throughout part of it.  He began taking the medication in 2003 and was a former bank manager and father of two children.  By putting ads on the web for sex he ended up being raped.  His behavior returned to normal after quitting the drug and he read about the effect on the web which were disclosed in 2006.  BD 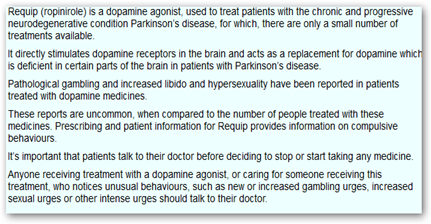 A Parkinson's sufferer has won a six figure pay-out against a drug giant after his medication turned him into a 'gay sex and gambling addict'.

Didier Jambart had been a well respected man, an upstanding member of the community in Nantes, western France, and a loving father and husband.

But within two years of taking the drug Requip he

was so addicted to both his vices he sold his children's toys to raise money and advertised himself on the internet for sex. He has now been given £160,000 in damages after a court in Rennes, France, upheld his claims.

The formerly well respected bank manager, local councillor and a father of two from Nantes in western France, had tried to commit suicide eight times after he turned into a sex-crazed gambling addict.

He told the court that he had emptied his bank account, sold his children's toys and stolen money from work colleagues, friends and neighbours