This is very interesting article and goes in depth to discuss how running the DNA on a biopsy can help doctors with prescribing cancer drugs and many of which are still in early testing stages.  It could also lead to more patients in that respect being referred to a clinical trial.

The big problem here cited with this article is the same old same old with insurance reimbursement and the fact that some of the genes have patents like the HER2 gene which has really been scrutinized by insurance carriers with Myriad.  This however is going to be the way treating cancer will be in a few years as it makes sense rather than guessing.  Of course with reimbursements we have the generic versus the name brand costs to look at too.  Right now the clients are mostly drug companies and of course they want to know where their products would line up as far as treatments as well and really that part of the entire scenario too.  The company also is getting some investments and mentoring from Google. 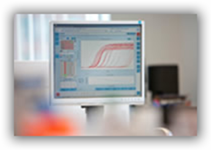 Foundation Medicine too has been rushing to file their patents as well and again we have this same question as to whether or not a gene should be patented.

“The company also scours the medical literature to provide doctors with the latest information on how genetic changes influence the efficacy of specific drugs.”

“Molecular testing by Foundation Medicine provides precise genomic information about your cancer in a way never before available.”

The commercial end is due to be launched soon and the website has a page of “patient stories” available to read.  BD

Michael Pellini fires up his computer and opens a report on a patient with a tumor of the salivary gland. The patient had surgery, but the cancer recurred. That's when a biopsy was sent to Foundation Medicine, the company that Pellini runs, for a detailed DNA study. Foundation deciphered some 200 genes with a known link to cancer and found what he calls "actionable" mutations in three of them. That is, each genetic defect is the target of anticancer drugs undergoing testing—though not for salivary tumors. Should the patient take one of them? "Without the DNA, no one would have thought to try these drugs," says Pellini.

Starting this spring, for about $5,000, any oncologist will be able to ship a sliver of tumor in a bar-coded package to Foundation's lab. Foundation will extract the DNA, sequence scores of cancer genes, and prepare a report to steer doctors and patients toward drugs, most still in early testing, that are known to target the cellular defects caused by the DNA errors the analysis turns up. Pellini says that about 70 percent of cases studied to date have yielded information that a doctor could act on—whether by prescribing a particular drug, stopping treatment with another, or enrolling the patient in a clinical trial.

So far, most of Foundation's business is coming from five drug companies seeking genetic explanations for why their cancer drugs work spectacularly in some patients but not at all in others. The industry has recognized that drugs targeted to subsets of patients cost less to develop, can get FDA approval faster, and can be sold for higher prices than traditional medications. "Our portfolio is full of targets where we're developing tests based on the biology of disease," says Nicholas Dracopoli, vice president for oncology biomarkers at Janssen R&D, which is among the companies that send samples to Foundation. "If a pathway isn't activated, you get no clinical benefit by inhibiting it. We have to know which pathway is driving the dissemination of the disease."

So why pay $5,000 to know the status of only about 200 genes? Foundation has several answers. First, each gene is decoded not once but hundreds of times, to yield more accurate results. The company also scours the medical literature to provide doctors with the latest information on how genetic changes influence the efficacy of specific drugs. As Krenitsky puts it, data analysis, not data generation, is now the rate-limiting factor in cancer genomics.

Although most of Foundation's customers to date are drug companies, Borisy says the company intends to build its business around serving oncologists and patients. In the United States, 1.5 million cancer cases are diagnosed annually. Borisy estimates that Foundation will process 20,000 samples this year. At $5,000 per sample, it's easy to see how such a business could reward investors. "That's ... a $100-million-a-year business," says Borisy. "But that volume is still low if this truly fulfills its potential."

Insurance companies may also be unwilling to pay $5,000 for the pan-cancer test itself, at least initially. Some already balk at paying for well-established tests, says Christopher-Paul Milne, associate director of the Tufts Center for the Study of Drug Development, who calls reimbursement "one of the biggest impediments to personalized medicine."