Home » Medically Related » My Commentaries » Other Items of Interest » Competition is So Vicious with Fast Food Companies, Jack in the Box Had to Succumb to a Bacon Milkshake that Contain No Bacon

Competition is So Vicious with Fast Food Companies, Jack in the Box Had to Succumb to a Bacon Milkshake that Contain No Bacon

Yes this one takes the cake for the dumbest food and nutrition article of the week or maybe even the century for that matter.  If you don’t get how you are marketed just by reading about this milk shake, well there may not be much hope for you to tell the difference today between good marketing and this kind of stuff. 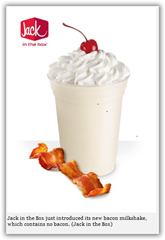 Obviously this a a ploy for some media attention for that it did the trick as it ended up here.  How many marketing people does Jack in the Box have?  One few over the cuckoos nest on this one as I did chuckle over it as I’m sure most everyone else did.  I didn’t even get this announcement in my email box which was surprising as every day I get a slew of nutrition experts, so maybe this one was a hard one for PR agencies to tackle. I hear about Charles Barkley’s fat ass at least once a week with a company trying to sell wagering money on dieting and take this for what it is, marketing and media attention.  BD

Ladies and gentlemen, we have a new contestant in the who-can-top-this outrageous new fast food item: the bacon milkshake from Jack in the Box.
The bacon shake is made with no actual bacon, just real vanilla ice cream, bacon-flavored syrup, whipped topping and a maraschino cherry, according to the website. We were thinking this had to be the most trayf food known to mankind before we saw the ingredient list. We'll get to the nutritional info in a minute.

Technorati Tags: milkshake,Jack in the Box,food,nutrition,diets,calories,fat,sugar,silly
Wednesday, February 08, 2012
Medically Related , My Commentaries , Other Items of Interest