healthcare with prosthetics being printed.  The post below goes back to 2010 when the 3d Prosthetics were announced and the price seems to be right and perhaps as the technology evolves they could even be lower priced today.

Probably one of the most interesting videos with printing was to watch an organ be printed.  The link below has more on that area.

Now back on track LayerWise is an extremely interesting company as the print dental implants too, sign me up immediately please!  I say that as I have spent around 60k over the years on dental care with implants, going back to the early days. 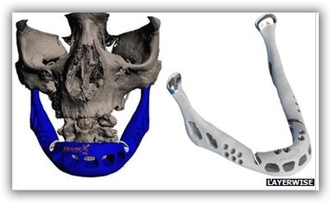 here at all.  This is the first step I have heard of that is basically “printing bones”.  It makes you wonder when they might print hips and knees, although assembly would still be required as there moving parts there but the parts could be printed to assemble.  I found their skull implant of interest as well from their dental company, DentWise. 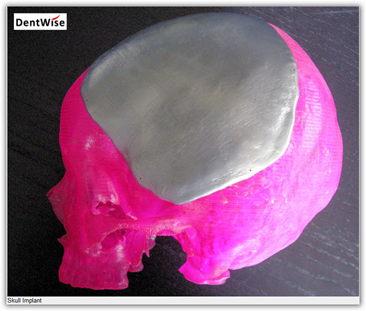 For sure this one is a story worth following up to see the progress made after her jaw implant.  Once the process gets even further defined, this could mean big savings with digital dental work for consumers.

Print me out a dental bridge please <grin>.

The patient has developed a bone infection that would not heal and normal reconstructive surgery was determined to be a risk due to her age.  BD

“Metal Additive Manufacturing is the technology by excellence to produce custom implants or dental structures. Based on 3D patient data acquired by tomography of 3D scanning, implants can be virtually modeled and directly printed in Titanium. The benefits of this approach are reduced theater time and a better aesthetic result.”

“Metal Additive Manufacturing is a NEW and INNOVATIVE solution that enables designers to RETHINK the way complex parts are made.

Metal AM is an additive technology similar to the conventional polymer Rapid Prototyping. Since parts are built layer by layer, THE TERM "UNDERCUT" IS A WORD OF THE PAST. The resulting parts however are AS DURABLE as a conventional part.”

A 3D printer-created lower jaw has been fitted to an 83-year-old woman's face in what doctors say is the first operation of its kind.

The transplant was carried out in June in the Netherlands, but is only now being publicized.  Technicians say the operation's success paves the way for the use of more 3D-printed patient-specific parts.

The implant was made out of titanium powder - heated and fused together by a laser, one layer at a time. 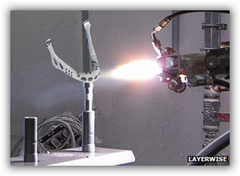 The surgery follows research carried out at the Biomedical Research Institute at Hasselt University in Belgium, and the implant was built by LayerWise - a specialized metal-parts manufacturer based in the same country.

Once completed, the part was given a bioceramic coating. The team said the operation to attach it to the woman's face took four hours, a fifth of the time required for traditional reconstructive surgery.

"Shortly after waking up from the anesthetics the patient spoke a few words, and the day after the patient was able to swallow again," said Dr Jules Poukens from Hasselt University, who led the surgical team.