This was first announced and as I read it here all items are still somewhat coming together but we have a name now and below was the initial announcement at the end of last year.

There could be some over lapping areas and with a big merge of technologies that would not be unusual.  Many were not aware of the readmissions manager software that Amalga has.

We also had this announcement with one of the EHR systems from GE so a lot of code involved here and GE brings a lot of hardware and medical devices to the table as well.

This could have been in the works for a while as way back in April of 2009 this statement came out with GE to integrate Microsoft CRM Dynamics, who knows.  BD

REDMOND, Wash., and BARRINGTON, Ill.— Feb. 13, 2012 — General Electric Co. (GE), through its healthcare IT business, and Microsoft Corp. today announced several developments for their planned 50-50 joint venture, including the intention to demonstrate future product capabilities at HIMSS12, the year’s largest healthcare IT trade show, later this month. The new company, to be named Caradigm™, is expected to launch in the first half of 2012, pending regulatory approvals and customary closing conditions. 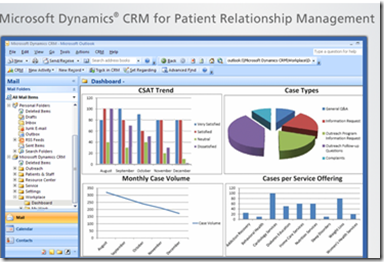 Caradigm will be aimed at driving a paradigm shift in the delivery of care by enabling health systems and professionals to use real-time, system wide intelligence to improve healthcare quality and the patient experience. Upon formation, the new company will develop and market an open, interoperable technology platform and collaborative clinical applications focused on enabling better population health management to improve outcomes and the economics of health and wellness.

“We have an exciting opportunity to transform healthcare globally with an established open platform and a new generation of applications focused on population health,” Simpson said. “Around the world, delivery system reforms and payment model changes are requiring healthcare providers to integrate data across silos of care delivery to enable better care coordination and performance improvement. We’re founding Caradigm to meet the changing needs of health and healthcare across the globe.”

The two parent companies bring complementary expertise to this new venture and will contribute intellectual property, including the following:

Microsoft and GE Healthcare are also announcing several Caradigm leaders who will serve under CEO-designate Michael Simpson once the new company is formed. Named leaders are the following: