Not too long ago a man hacked a Fitbit to get his data and I think we are seeing more and more of this happening.  Granted there’s a big difference between a Fitbit and a defibrillator and the data of course.  Why shouldn’t patients have their own data is a 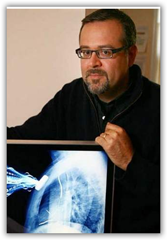 good question and ePatient Dave said this a few years ago with “give me my damn data”.  It gets attention doesn’t it.  Even though we may not understand all of it, we should have it as shoot I have manuals at home about things in my house that I don’t understand all of it, but I have it in case I need it for a repairman and data, the same thing have available for a doctor.  You may on vacation or somewhere away from home and you have have access.

In addition today with so much information being sold through web services, that’s another good reason to want a PHR, let’s say like HealthVault that can store it for you too.  I said that from the day HealthVault started is that I want information direct in the PHR and not brokered and sold along the way.  Some take statistics and use those for research and it is supposedly stripped of all identification IDs but now folks are re-matching some of the information and next thing you know your put together and sold out there beyond research purposes.

So the hackers have come in to say we will help you so you don’t remove your device.  Perhaps some of the device companies will have an open ear soon.  BD

Hugo Campos has a small computer buried in his chest to help keep him alive. But he has no idea what it says about his faulty heart.

All the raw data it collects, especially any erratic rhythms it controls with shocks, goes directly to the manufacturer. Later, some of it gets sent to his doctor.

But Campos had to step onto a national stage in his fight to see the data his body produces.

His David-and-Goliath campaign puts him on the leading edge of what's called the e-patient movement -- "engaged, equipped and enabled" -- that seeks to harness data so patients can learn more about their bodies.

"It's mine. I paid for it. It's in my body," says the tech-savvy 45-year-old who, since his sudden collapse at the Fruitvale, Calif., BART station four years ago, has devoted himself to studying cardiology textbooks, attending device symposiums and scheming ways to access the electronics of his tiny defibrillator.

"I have a right to my own damn data," he said

In resistance, Campos has decided on a risky political act, rejecting his remote monitor.

"I will not be monitored remotely unless I'm part of the loop," he says.

But new allies have rallied to him: hackers.