Feds Bust Doctor in Dallas, Texas Area for Medicare Fraud–No Yacht and No Escape from the US Now… Biggest MD Fraud Case in History

When you read through this he had it all pretty well planned out so this was not an “accidental” case of errors with medical billing by any means.  Getting busted one and then going around to create another company to keep functioning is like really asking to be caught and there’s greed in fraud for sure.  What is also kind of funny is the book that they found that evidently was his business plan to make all the money and run, "Hide Your A$$ET$ and Disappear." 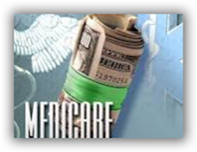 Also too using folks from shelters and giving them grocery money and so forth was not a good idea either and if the folks were hungry well they maybe got some food out of the deal and probably had no idea as to the big over all scheme that was taking place.  Stories like this are just amazing as honest doctors fight, dig and scratch at times to get what’s owed and then you have this one who figured out how to work the system for $360 million.  Everyone got certified for care and a boiler room the article stated was in place to handle the paper work.  BD

Federal officials say they have taken down the largest Medicare fraud scheme investigators have ever discovered: a $375 million dollar home healthcare scam operating in the Dallas, Texas area.

The alleged "mastermind" of the fraud, Dr. Jacques Roy, is charged with certifying hundreds of fraudulent claims for Medicare reimbursement, and pocketing millions in payments for services not needed, or never delivered. Prosecutors say the 54-year-old Dr. Roy, who was arrested today and could be sentenced to life in prison, operated a "boiler room" to churn out thousands of phony Medicare claims and recruited homeless people as fake patients.

In some cases, the indictment charges, Medicare patients were recruited by offering cash and groceries in return for signing up for home health care. These fraudulent "patients" were then allegedly certified by Dr. Roy for services. Some of those recruits didn't even have a home to visit, according to sources close to the investigation: they were recruited from homeless shelters.