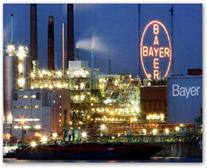 , and why shouldn’t drug companies as we pay more here and somewhat subsidize others, but he stated in their own home country of Germany that the generic competition was becoming a much issue there.  It’s a bit of a catch 22 as many can’t afford the more expensive drugs who need them and then the corporation says they need the money for R and D, so I guess we go back to the NIH for more funding again.   Even big corporations are not so much worried about credit ratings being at the absolute top and I guess with plenty of cash the company doesn’t have to worry.

Above are a couple examples of what is happening in India with generic drugs and it wouldn’t be too much of a surprise to see other countries doing something of the same.  BD

"The danger of pushing the prices of prescription drugs down, down, down is that at some point the business model of developing these drugs will lose its attractiveness," he said.

Drug companies are also facing increasing pressure from generic competition as they lose patent protection on some of their biggest selling products.

On Monday, Bayer said an Indian patents appeals board rejected its petition to block the entry of a generic version of its cancer drug Nexavar. http://www.reuters.com/article/2012/09/19/us-bayer-dekkers-idUSBRE88I1HR20120919?feedType=RSS&feedName=healthNews&utm_source=feedburner&utm_medium=feed&utm_campaign=Feed:+reuters/healthNews+%28Reuters+Health+News%29&utm_content=Google+Reader