Home » Medically Related » My Commentaries » Pharma/FDA News » Testosterone Marketing Going Like Gang Busters But How Safe is Hormone Replacement and What Methodologies for Dosage? Some of the Same Questions We Ask With Women’s HRT

Testosterone Marketing Going Like Gang Busters But How Safe is Hormone Replacement and What Methodologies for Dosage? Some of the Same Questions We Ask With Women’s HRT

Forms of testosterone replacement therapy include: oral tablets, buccal tablets, subcutaneous pellets, transdermal patches, injections and topical gels applied by the hands as well as the roll on from Axiron.  Here’s a couple back links on the FDA approval of a couple of the products used.

There’s the same issues as women have as well with HRT and that is the question on how safe is it?  There have been studies that show prostate cancer is diagnosed in larger numbers when HRT 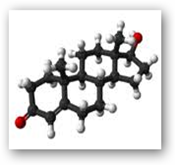 is used and we all remember the breast cancer scare from the Women’s Health Initiative on the other side.  Sometimes doctors even prescribe testosterone for women to revive libido problems too.  When applying topical solutions too one has to be sure to wash your hands well as those hormone when touching someone else could easily expose others to them as well, thus again an area of concern and use.  There is bio identical testosterone and I am guessing that like women’s hormones, those are largely what is being spoken of here since patches tend to be bio identical drugs.  Gosh knows on the female side of things we have been waiting for years to have some studies on the bio identical side of things versus the actual HRT drug as well, so perhaps we are in the same game here?  I have a feeling though that some of the answers will come to light or at least put us in the right direction as genomic sequencing grows with looking for mutations as far as the potential of developing cancer.  BD

Welcome to the latest big marketing push by the nation's drug companies. In this case, it's a web page for Abbott Laboratories' Androgel, a billion-dollar selling testosterone gel used by millions of American men struggling with the symptoms of growing older that are associated with low testosterone, such as poor sex drive, weight gain and fatigue.

Androgel is one of a growing number of prescription gels, patches and injections aimed at boosting the male hormone that begins to decline after about age 40. Drugmakers and some doctors claim testosterone therapy can reverse some of the signs of aging — even though the safety and effectiveness of such treatments is unclear. "The problem is that we don't have any evidence that prescribing testosterone to older men with relatively low testosterone levels does any good," says Dr. Sergei Romashkan, who oversees clinical trials for the National Institute on Aging, a part of the National Institutes of Health conglomerate of research centers. Watson Pharmaceuticals now markets its Androderm patch, which slowly releases testosterone into the bloodstream. Abbott has its gel that can be applied to the shoulders and arms. And Eli Lilly's Axiron is an underarm gel that rolls on like deodorant. Androderm, launched last year, had $87 million in sales, and Axiron, which was launched in 2010, had sales of $48 million last year. In 2010, researchers at Boston University's school of medicine halted a large study of testosterone in senior men because patients taking the hormone were five times more likely to suffer a serious heart event, including congestive heart failure, than those taking placebo. A review of 19 testosterone trials in 2006 found that prostate cancer was significantly higher among men taking testosterone. http://vitals.nbcnews.com/_news/2012/09/09/13761777-testosterone-marketing-frenzy-draws-skepticism?lite?ocid=twitter