Ok did you get all of that in the title?  Are you confused maybe?  All the big actions with insurers seems to take place in the subsidiary companies and this has been going on for a while.  Now Health Care Service Corporation is listed here as the 4th largest health insurance company in the US.  It just all depends how you slice and dice who owns who and where the contracts and dollars go.  We have more of these confusing algorithms here and details of ownership that make it murky.  Blue of Montana doesn’t have a lot of reserves and with joining forces with this other Blue subsidiary/conglomeration they can have access to additional funds to improve their technology.  There was no price listed.  This move will help them compete with United Healthcare in the state who is eating their lunch over contracts and algorithmic pricing.

Aren’t These Health Insurance Contracts a Bitch!  Battle of the Algorithms

You can read below and see yet another big Blue Cross subsidiary, Western States Insurance,  is being bought by Payne Financial Corporation

, so are the Blues selling off subsidiaries for a purpose, like money?  Will folks in Montana and in some of the other areas know who they are insured by in time?  Who owns who <grin>. Refer to the first line above about contracts being a bitch:)   At least in this case the parties are known and there’s no lawsuits.  Interestingly enough the Western States website has a page to where they solicit and focus on acquisitions too.  BD From the Payne Website: “Focused on the Inland Northwest, Payne Financial Group is a large, full service, independent insurance agency, specializing in personal

insurance, business insurance, employee benefits and surety bonds. We understand the importance of risk management and asset protection. We start by covering the basics and then fine tune with additional layers protecting the niche or specialized needs you may have”. Also of note, Healthcare Service Corporation also owns a stake in the Blue Cross Blue Shield Venture Capital company that is managed by a company names Sandbox and just moved to San Francisco to set up yet one more incubator so perhaps some additional interest there for the Blues of Montana being purchased.  BD 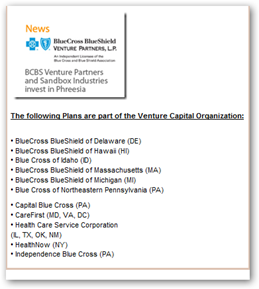 HELENA – Blue Cross Blue Shield of Montana, the state’s dominant private health insurer, announced Monday it will be bought by the fourth largest health-insurance company in the nation – yet still remain as a nonprofit firm with a state focus.

Blue Cross said it will become part of Health Care Service Corp., a coalition of Blue Cross/Blue Shield plans in Texas, Illinois, Oklahoma and New Mexico. The company, headquartered in Chicago, has more than 13 million customers.

“With just $128 million of reserves (for Blue Cross of Montana), it makes it very difficult for us to come up with that kind of money.”

For example, HCSC already is developing and using mobile applications, whereby customers or providers use their smart phones, computer tablets or other mobile devices to interact with the insurer, Frank said. Also on Monday, a major subsidiary of Blue Cross – Western States Insurance – announced it will be purchased by the Payne Financial Group. Both firms are headquartered in Missoula. http://mtstandard.com/news/state-and-regional/blue-cross-joins-coalition---health-insurance-co-becomes/article_970cb742-0169-11e2-a0bc-001a4bcf887a.html