For the consumer who is not tech savvy on all of this terminology I have to say it must be confusing as it’s an effort for me to write and try to explain some of these things so everyone can get an idea of what’s happening here.  Code, code and more code…keep that in mind

and time, time and more time needed, so if you realize that all the systems out there need some standards and universal code to work with, some of this might make more sense.  Time and code are the issues everyone is facing today.  I have covered quite a bit about the Blue Button campaign and it certainly is a good thing by all means and the idea and the creation of the Blue Button taking a simple ASCII text format and making it available for sure is a winner and I tell everyone, VA and Medicare users to go get it.  Now the Blue Button does have some competition with medical records systems that already have a format and/or portal that makes patient information available for viewing and downloading.  So the next question is how do I get what the Blue Button may have into that technology?  Not a simple answer and there’s developers from many different area working on just that…remember code and time and more code and time:)  With that last statement I think it kind of drills home the fact on how important standards are today as the more you have using data standards, is is less time and code. Since I’m on this topic, time for a little political comment here on the logic of repealing of the healthcare law…back to those same words…time and code.  The entire Medicare system runs on a huge IT infrastructure and first of all look at the time and work here just for the Blue Button..it’s a lot.  Could you imagine the work and money it would require to change the entire Medicare IT infrastructure, let alone find enough engineers to do it?  Anyway, anytime I hear the Ryan plan on changing Medicare I have to laugh as there’s not enough money and resources to do that…digital illiterate politicians out there talking up a storm and making news, but again it would be impossible so I really do wish those running for office were a little smarter with addressing the US consumers today instead the “drama king and queen” antics that we hear all over the news.  He talks dream and we don’t have the resources with money or with enough engineers…at some point you have to be realistic and stop buying in to the emotional sell of what can’t be done and hopefully along the line we may get some smarter politicians who may understand this.  The campaign for the Blue Button certainly is having some success with consumer awareness but sometimes a little

disappointing that all the features they want now are not there yet.  Time and code and time and code..keep that in mind:)  I know it’s hard to understand all of this when a new game pop out there on the web and can basically cook breakfast for you and you wonder, why does this take so long.  Just remember too that software for games is not life critical either so they have lot more leeway and if they have software issues, they fix it and nobody dies and everyone gets entertained and jumps all over some new little feature added.  We sure would like to see that too with the Blue Button and maybe we will but it’s time and code issue and getting the privacy and formats done right out of the gate.  Patients say they want a better record and not have to look up codes…again this work in progress…back to time and code.  Years ago when I worked with bringing lab results in the system I wrote I had to do that and match lab codes to the text that describes it, otherwise you just get a number to go look up and we don’t have time for that today, so stop and think there are other elements that need to be indexed such as medications and so forth with what is called a “primary key” used to match with data bases.  Working data base information with XML is amazing and makes a lot of this possible too, but again time and code and enough engineers too. So patients get marketed with some of this too with the awareness factors and sure many consumers get lost in the shuffle.  Myself when I explain the basics to VA members and Medicare I pretty much stop at the instructions on how to go get it as that’s enough for your average consumer to understand at one point today.  If they can do that, they are miles ahead.  Here’s a good case and point story that happened at Walter Reed, the officer logged in with his phone and got the information.  It was credible and readable so enough said.  With the way marketing grows as some of these technologies come on line too there will be even more competition with one company saying “my Blue Button is better than ABC company’s”…just watch..I say that because of everything I read and see out there.

You also have Microsoft with HealthVault who’s out there ahead of the game most of the time and has a lot of their connectivity built in and out there for developers to connect.  Shoot they even have a nice dicom viewer built in to the HealthVault software.  As a matter of fact, I learn new stuff all the time here too and was not aware of the SmartApps open source initiative either.

I was reading Sean Nolan’s blog about this and we have yet another way in the works to securely get data from EHR systems and he already wrote a small application (yes Microsoft folks use open source too) for HealthVault, on an airplane no less:) That’s actually a compliment as I couldn’t do that to save my life as the noise alone would be enough to distract me.   Here’s a screenshot just for show on how we have another area that works with EHRs and PHRs for securely obtaining data.  A short quote from his article below:

“So …. on the plane home I decided to put my IDE where my mouth was and build a SMART app for HealthVault. We spend a lot of time trying to help providers comply with the patient engagement metrics around meaningful use, so that was an obvious place to start. Thus was born the “HealthVault SMART Patient” app … which enables any provider using a SMART-enabled EHR to send their patients a copy of their clinical information as a CCD/C32 document:” 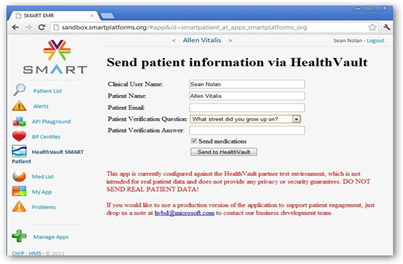 In summary case in point here is yet one more way to get information from an EHR  to a PHR.  So let’s not get confused here though and think that everything can be written on a plane trip from the east to west coasts, as there were years of coding and research and development that made this effort possible as software and code builds on itself and it keeps getting better when innovative minds get their heads around what can be done.  I hope this maybe explains a little bit of the time elements though and the hard work by many to make all of this a reality, a simple format for consumers to get their data.  For now, take what you can and make sure you have a record in whatever format you want and can understand how to use, as any PHR and Blue Button information is better than “NO” information.  BD

As more companies get behind Blue Button, maintaining

interoperability becomes a more critical requirement. Health Level Seven International (HL7), the international health IT standards body, has adopted Blue Button as an "authoritative interoperability exchange format," and the VA, the Office of the National Coordinator for Health IT, and others are now building an XML-based standardized version of Blue Button data that coincides with the HL7 Consolidated Clinical Document Architecture standard. The HL7 standard will make it easier to share information with and among health providers and to develop applications and services that aggregate Blue Button data from multiple sources and present data in a simple format. Levin said the industry is moving in a direction "that adds value to the data, that mashes it, that aggregates it, and that shares it not just between patient and provider, but between institutions." Blue Button leadership calls this the Automate Blue Button initiative. http://www.informationweek.com/government/enterprise-applications/feds-want-wider-use-of-health-records-ap/240007937?pgno=1