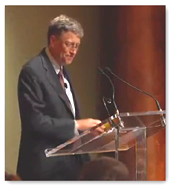 together, sometimes it’s the government, sometimes its interests with commercial companies, and sometimes it’s invented.  He talks about the free market and where demands can be met.  He found out in some countries nothing was being done for the poor.  Vaccines for the poor countries were not available he found and the Foundation needed incentives to get the pharmaceutical companies involved.  They funded research and helped governments outside the United States.  Warren Buffet’s gift helped a lot.

He says his work as a philanthropist is the most interesting job he has ever had.  This is great to see a lot of media work with both Bill and Melinda Gates speaking out and encouraging others to work in the same direction as their Foundation.

There’s also a longer version link below with a full introduction and a question and answer session here if you have a little more time.  There’s some great humor in the long version as well as Warren Buffet was the first choice to speak at the Forum:)   He says the US needed to re-dedicate ourselves when it comes to education.  Technology talk, yes there’s more jobs are going to be available that we can’t catch up to educate enough to be ready to fill them.  BD