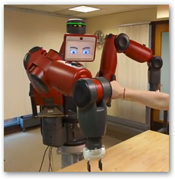 drug factory maybe?  We know how automated the processes are but putting bottles in boxes for shipping maybe?  It would depend on the factory.  When you watch the video you can see where that could make sense.  Baxter is the name of the Robot.

There’s no programming for the Robot and it looks like a macro picks up what it needs to be done with being trained from a non technical employee.  It doesn’t even need a cage and senses when humans get in it’s work space.  Software updates give the robot new functions.  You have to love the face or screen with the eyes.  BD

Rethink Robotics Inc. introduced Tuesday a low-cost—and cute—robot named Baxter that can do such factory chores as picking parts 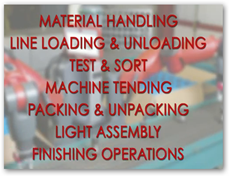 off a conveyor belt, so long as they don't weigh more than five to 10 pounds.

The two-armed robot has a computer-screen face with animated eyes, stands at about 3 feet, and is priced at $22,000. It is designed to do such tasks as loading and unloading, sorting and tending of other machinery, jobs typically done by people.

Most industrial robots are larger, one-armed machines whose tasks include lifting heavy objects, cutting metal or welding. Those machines typically cost hundreds of thousands of dollars. Baxter is designed so that workers can "teach" it to do tasks, the company said. For instance, a worker could guide the robot's arms to an object. Cameras embedded in the wrists would then determine how to grasp the object. The robot nods when instructions are clear; a puzzled look appears on its computer-screen face when they aren't. http://online.wsj.com/article/SB10000872396390443720204578004441732584574.html