This sounds like very good news as you read in the 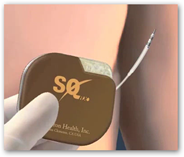 news about wires needing to be replaced.  Here’s a couple of articles from the last 2 years and it has not been limited to one manufacturer at all.  I think be now we have all read the many news articles that have been out there and the risk involved with going back in to have the wires replaced as it takes a special doctor with experience in doing this as over time the wires become covered with our human tissue that grows.

FDA Recalls St. Jude’s Riata Defibrillator Leads–Estimated 79,000 Patients in the US Implanted with the Device/Leads

When you have one of these devices and you get a recall notice, it could mean surgery to replace the wires so this really looks to be a huge improvement from Boston Scientific.  They bought the company in California who make the device, Cameron Health and in May of 2010 it has already received the European CE stamp of approval.  The procedure takes about an hour to implant.  There’s a video at the website that shows an animation of how it is placed under the skin.

New Defibrillator Has No Wires Leading to the Heart – Clinical Trial in the US, Device has Europe CE Mark We had to wait here in the US for the clinical trial to finish so the FDA was being safe with all the talk today about safe devices.

The company also provides a Patient ID card to carry with you and to show to airport security  as the device could trigger alarms.  One thing to note here, look at the cost of getting the device approved…Boston Scientific is paying an additional $150 million for the FDA approval…no wonder devices can be slow to be approved when you look at the cost.  In addition it was mentioned that Boston Scientific will be making payments back to Cameron Health, based on the sales as they only paid $150 million for the company so this appears to be a purchase of Cameron with contingency stipulations, again the cost and the small San Clemente company probably was nowhere near being able to afford the FDA submission and cost.  BD

the first and only commercially available subcutaneous implantable defibrillator or S-ICD for the treatment of patients at risk for sudden cardiac arrest or SCA.

The company said that the S-ICD System sits entirely just below the skin without the need for thin, insulated wires -- known as electrodes or 'leads' -- to be placed into the heart. This leaves the heart and blood vessels untouched, offering patients an alternative to transvenous implantable cardioverter defibrillators (ICDs), which require leads to be placed in the heart itself. The S-ICD System is designed to provide the same protection from sudden cardiac arrest as transvenous ICDs. The system has two main components: (1) the pulse generator, which powers the system, monitors heart activity, and delivers a shock if needed, and (2) the electrode, which enables the device to sense the cardiac rhythm and deliver shocks when necessary. Both components are implanted just under the skin—the generator at the side of the chest, and the electrode beside the breastbone. Unlike transvenous ICDs, the heart and blood vessels remain untouched. http://www.rttnews.com/1974435/boston-scientific-says-fda-approves-subcutaneous-heart-defibrillator.aspx?type=qf