MD Anderson Cancer Center In Houston Launches Massive “Moonshot” Effort To Find Cures and Lower Deaths for 8 Types of Cancer Funded By Gifts, Grants And Revenues From the Center

The center currently spends over $700 million a year 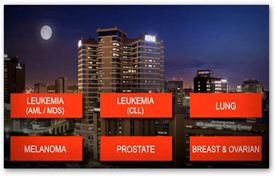 on research and the additional funds are on top of this.   Myelodysplastic syndrome, breast and ovarian cancer, along with lung, prostate, melanoma and two types of leukemia are the targets.  MD Anderson is the nation’s largest cancer center.  In view of the fact that the center is looking for gifts and donations as are many hospitals and medial centers, one more time to make the pitch to tax data sellers and get the money moving where it is really needed, cancer cures to me seem more important than 20 more new games.

So want more money for research, go where

the money’s at to where the data sellers get their data for nothing and profits for free…billions in profit and they should not object as the employees of all the entities may need some of this research for treatment or a cure someday, so no reason for anyone to balk at the idea when we have billionaires doing their share by all means.  David Koch, who people sometimes love to hate is also raising money and this is where he was treated for his prostate cancer.  Ronald DePinho is a scientist as well as being president of the hospital so it takes someone with some hands on to get things moving as I always say.  Mr. Koch has donates millions to other facilities to include MIT and the memorial Sloan-Kettering Cancer Center but his public display of politics always seems to get him in to hot water.  His own cancer was being treated at another facility and his physician sent him to MD Anderson and now with a drug treatment therapy prescribed he has no signs of the persistent cancer that kept returning.

A moon shot program of course could not exist without extensive genomic research.  There’s a donation page online to make it easy a well.  BD The nation's largest cancer center is launching a massive "moonshot" effort against eight specific forms of the disease, similar to the all-out push for space exploration 50 years ago.

The University of Texas MD Anderson Cancer Center in Houston expects to spend as much as $3 billion on the project over the next 10 years and already has "tens of millions" of dollars in gifts to jump start it now, said its president, Dr. Ronald DePinho.

One of the cancers is myelodysplastic syndrome. "Good Morning America" co-anchor Robin Roberts has that kind and had a bone marrow transplant to treat it on Thursday. The others are especially deadly forms of breast and ovarian cancer, along with lung, prostate, melanoma and two types of leukemia. http://news.yahoo.com/texas-hospital-plans-moonshot-against-cancer-040248599--finance.html