You can review a back link below for some history as the program was on and then it was off and then it was back on again, all over the use of embryonic stem cells being used.  The clinical trials are still working in the spinal cord area in Switzerland, but not much in the US other than the first couple of enrolled patients.  Stanford University was also in on the trials. 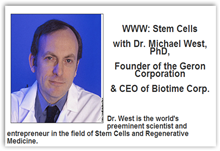 than the current recommended treatment in extending patients' lives without the disease progressing.

While an interim analysis of the company's non small-cell lung cancer (NSCLC) study supported a modest benefit from the drug, Geron said it was doubtful about starting late-stage trials for the indication.

"These are two of their big opportunities gone away," Needham & Co analyst Chad Messer said. "The problem looks like some cross-toxicity between imetelstat and paclitaxel."

An internal review revealed that more patients given a combination of imetelstat and paclitaxel, an approved chemotherapy drug, were dying or discontinuing treatment, compared with those administered only paclitaxel. http://www.reuters.com/article/2012/09/10/us-geron-study-idUSBRE8890JQ20120910