how companies pass judgment with flawed data or create algorithms with SQL parameters to deny service, insurance claims, etc.  This article here talks about the automation process of copyrights and the use of algorithms to police it on auto pilot.  Sounds like fun stuff, well not really.  If you read the entire article you can see where the robots are going to make plenty of errors with this and it was already shown with Michelle Obama’s speech at the DNC and a few more places like the Hugo Awards and NASA, so we are in for a lot of fun here and a bunch of interrupted video streams.  Come on let’s face it if NASA, the White House and others are already caught up in this mess, what does that say for the rest of us?  Should we go back to “elevator music” <grin>.  This is just one more area where the algorithms are taking over and there’s software companies out there of course trying to perfect this.  Here’s the image below from the full story at WIRED. 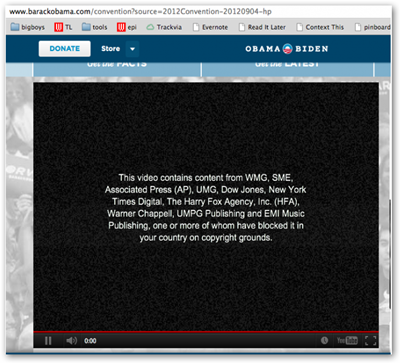 Ok so someone gives you permission to use copyrighted material, is the algorithm going to know, probably not so here we go again with machines and humans needing to work together as someone will have to alter the structured query language that calls that copyright violation when videos stream.  When you think about this enforcement effort, look at the big money these software folks want to make doing this too, and it’s big.  Now let me say this, the work it will take to have folks changing and allowing parameters on queries to be changed all the time to allow folks who DO have permission to use copyrighted material will be huge and gee this sounds like it will create a few jobs maybe?  How is this going to evolve to work?  If it is not changed for selected material to be used, well guess what, the Killer Algorithms strike again!  The article goes on to say that Ustream has more traffic per second than YouTube so we are talking a lot streaming here.  At the Hugo awards they used the “free” Ustream service and were unaware that this would happen and Ustream was not contacted before the show and the software is called Vobie and is used by many movie studios, record labels, etc. and was developed in China.  The Hugo awards were cut off and apparently not able to get it back online as they could not over ride the algorithmic bots that process the information looking for copyright violations.  Now to continue on the Feds could shut you down for copyright violations too if they get in on the act and they have made some errors here too.  This quote from Twitter says it all!  I added my 2 cents and retweeted it as we have that in healthcare and in the financial world as our government can’t keep up with all of this and we have a Congress dumber than rocks when it comes to algorithmic processes and creating laws to work with those algos.  They sit there in denial and still think they are creating definitive laws when in fact they are not as the next day after a law is passed, companies, banks, etc. are right out there creating duping algorithms that will stretch the imagination and find every loop hole and create new loop holes for whatever gets passed so we do need some algorithmic centric laws soon.

If you want to read the other 40 some chapters on Killer Algorithms, here’s the link to the links…

As far as Algo Duping, here’s a post from a few days ago that explains how we get sucked in with marketing and how the government is oblivious as to how the processes worth with math and formulas.  It’s happening out there and those naïve enough to think that algorithms alone can solve problems have another thought coming, and one that comes to mind is the re-admissions to hospitals.  And what did I suggest over 3 years ago?  Next link below <grin>.  People that write code see a bit of future as we can surmise how the next of code will work, especially when there’s money to be made.

Sure information is helpful and can guide us to some great solutions but there’s no “Gold Algorithm” out there that’s a one stop shop and due to digital ignorance in government the darn things become law and the machine and those with enough money to pay geeks good money to write them keep getting richer.  BD

The Rise (And Need) for Human – Computer Cooperation- A Good Thing and a Challenge for a Society, Governments and Companies That Have Been “Algo Duped” for Way Too Long (Video)

As live streaming video surges in popularity, so are copyright “bots” — automated systems that match content against a database of reference files of copyrighted material. These systems can block streaming video in real time, while it is still being broadcast, leading to potentially worrying implications for freedom of speech.

On Tuesday, some visitors trying to get to the livestream of Michelle Obama’s widely lauded speech at the Democratic National Convention were met with a bizarre notice on YouTube, which said that the speech had been blocked on copyright grounds. On Sunday, a livestream of the Hugo Awards — the sci-fi and fantasy version of the Oscars — was blocked on Ustream, moments before Neil Gaiman’s highly anticipated acceptance speech. Apparently, Ustream’s service detected that the awards were showing copyrighted film clips, and had no way to know that the awards ceremony had gotten permission to use them. Last month, footage from NASA’s triumphant Curiosity rover landing was blocked numerous times on YouTube, despite being in the public domain, because several companies — such as Scripps Local News — claimed copyright on the material. Google is still dealing with a lawsuit filed by Viacom against YouTube. Grooveshark, an online music site, is itself being sued and has been repeatedly kicked out of Google’s Android app store (so much for brothers-in-arms). http://www.wired.com/threatlevel/2012/09/streaming-videos-robotic-overlords-algorithmic-copyright-cops/all/

Saturday, September 08, 2012
My Commentaries , Other Items of Interest , Technology