Home » Medically Related » Other Items of Interest » Have Pain – Go Ahead and Swear, It Helps Study Says

Have Pain – Go Ahead and Swear, It Helps Study Says

New study says it’s ok and it helps by diverting the attention of where your pain lies.  No mention of how effective this might be for chronic pain 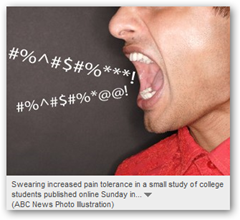 and the English language as used today could really evolve (grin).  BD

It also increased heart rate and decreased perceived pain -- signs of a "fight-or-flight" response that may help mitigate actual pain, according to Richard Stephens of Keele University in Staffordshire, U.K.

"If people experience the emotion of fear to a significant degree … their pain tolerance increases," Stephens said. "There seems to be something similar here. Swearing is emotional language. If it's not fear, it might be aggression."

Dr. Gail Saltz, professor of psychiatry at New York Presbyterian Hospital and a psychoanalyst with the New York Psychoanalytic Institute, said that a fight-or-flight response absorbs mental capacity so you can't think about your pain, and increases certain nervous system functions while slowing down others -- such as gut function -- to maximize chances of survival.

She said pain tolerance also has a lot to do with coping mechanisms, distraction being a key example.

"If you're screaming obscenities, you're not thinking about your pain," she said. "The distraction compartmentalizes the other experience."