FDA Approves Hypertension Drug (with Conditions) that You Inhale - Tyvaso

This is more than just a drug, it is a drug and a delivery system technically.  More and more I seem to be seeing more drugs steering towards an inhalable formula.  This is not the first one as there are others on the market.  The first one that everyone seems to remember was the “huge” giant inhaler which is no longer available from Pfizer, it looked like a bong, but things are smaller and better now.

One drug for migraines that is an inhalable recently met its trial goals and then there is Afresa from Mankind that has been submitted to the FDA for inhaled insulin.

The artist rendering below gives an idea as to what the delivery system devices looks like and the company with their FDA approval will be making some changes on that portion. Will it end up in a blue tooth inhaler?  The subsidiary of United Therapeutics, Lung RX will be releasing the product in September.

In other related news today, a Swine Flu vaccine that you inhale is also on its way to market.  BD 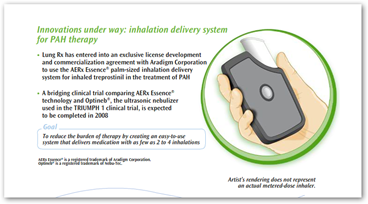 Even though the drug, Tyvaso, had faced a couple of delays on its way to approval, analysts were expecting a regulatory nod by Thursday's action date as it was mostly the drug's delivery device that had faced a close scrutiny than the drug itself.

The company has agreed to post-marketing commitments to modify certain aspects of the inhalation system, perform a usability analysis and collect pharmacokinetic data, which shows the body's reaction to a drug, to verify expected dosing with the modified device.

"It is positive that the company got the drug approved and they can make the modifications while the drug is on the market," Collins Stewart analyst Salveen Kochnover said.

She sees about $2.5 million in Tyvaso sales in the fourth quarter and about $51 million for the next year.