Home » Insurance » Medically Related » Many States Trying To Figure Out Where to Get the Money to Keep Insurance Exchanges Open, While the GOP Wants the Money Back Already Spent?

Many States Trying To Figure Out Where to Get the Money to Keep Insurance Exchanges Open, While the GOP Wants the Money Back Already Spent? 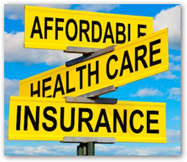 with that idea as it won’t work.  Now back on track various states are trying to figure out now that the Federal funds are going away, how to stay open.  These are the states that set up their own exchanges and not the ones covered by Healthcare. Gov.  Those states have another issue called a “lawsuit” where the Supreme Court will make a decision on whether or not they are legal, so if it’s not one thing, it’s another.

California is the only state that looks like there’s enough money and is putting aside some Federal Funds to fight off projected budget cuts.  Some states are adding a tax or a surcharge.  As of January the exchanges are supposed to be self sustaining and all are not making it.  BD

PROVIDENCE, R.I. (AP) — The federal government shelled out billions of dollars to get health insurance marketplaces going in the 14 states that opted to run their own. Now they must act like true marketplaces and start paying for themselves.

Under President Barack Obama’s Affordable Care Act, state-run health insurance exchanges need to be financially self-sustaining starting in January. Some appear to be on that path, while others have shaky funding models or even none at all.

Some states, prohibited from using state money, are imposing fees on plans sold on the marketplaces. Others are spreading costs more widely — which, in one instance, has drawn a federal lawsuit.

Rhode Island received high marks for the smooth rollout of HealthSource RI amid last year’s stumbles by the federal government, and the agency director says the state’s health care reform “revolution” has begun. But the state does not have a way to pay for the exchange’s long-term operations, and some lawmakers in the state General Assembly have suggested shifting to the federal exchange.

The cost to operate Rhode Island’s exchange is estimated at $17 million a year, although an earlier estimate pegged the cost at $24 million. Republican state Rep. Patricia Morgan introduced a bill last session to transfer its operations to the federal government, but the legislation was held for further study.

New York is relying on two agencies’ general revenue, while Maryland is using money from an existing 2 percent tax on insurance plans. Republican Delegate Anthony O’Donnell, a critic of Maryland’s decision to create its own exchange, said he continues to question its sustainability. He said last week that he is concerned “about the entire structure and that it may collapse of its own weight.”

To cut costs, Colorado’s state-run exchange has reduced overall spending 18 percent, including on technology and marketing. It’s imposing a 1.4 percent fee on monthly premiums for its plans but also approved charging a $1.25-a-month “general market” fee on all individual and small group policies, including those sold outside the state exchange.

Some lawmakers called the fee unfair, and one board member voted against it. It is expected to raise an estimated $13 million a year before it expires in 2016.