Home » Medically Related » Other Items of Interest » Technology » Rebuilding and Cleaning Up the VA- New Secretary In Action, Hands On and Restoring Faith–60 Minutes..

Rebuilding and Cleaning Up the VA- New Secretary In Action, Hands On and Restoring Faith–60 Minutes..

This was a good interview and already the Secretary has already visited over 40 facilities.  Maybe this is going to be good as certainly sounds like it as Robert McDonald  seems to have a clear path on what he needs to do and makes no bones about it. 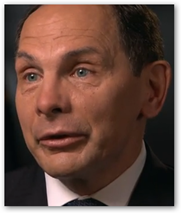 After everything that has gone on, I think his personal visits are great and important to let the people at the VA know there’s help on the way and as he states there’s a lot of good people there working to help Vets.  We all remember the whistle blower doctors in Phoenix and one is interviewed in this article.  In healthcare, I said the VA is just the tip of the iceberg as we need to look at patient care all over and yes it may not be as desperate as the VA but patient safety should be front stage now.

Robert McDonald served in the military himself and thus he has that connection from earlier in life.  Patients have had to make long trips to get care and that was also the case in Phoenix too.  One VA patient handed McDonald a note and said she had to travel from Alabama to Boston to get decent care.  There are about 28,000 new people to hired and and there are others who will have to go he said.

McDonald is personally recruiting doctors himself for the VA and working to bring more on board and is giving raises to existing doctors.  In addition there’s 2500 mental health doctors to be hired for the VA and you can’t help but think how short they are on help when you hear such big numbers.  The patients getting care though in various facilities were very happy with their care, it’s just a matter of getting more Vets cared for.  Again when you hear the numbers of people to be hired, maybe McDonald is going to be able to push forward where others have failed, I hope so.  BD

He'll need that sense of humor because McDonald is battling a behemoth cobbled together over decades. The VA is the second largest agency in the entire federal government behind only the department of defense.

Secretary McDonald: We have no hope of taking care of veterans if we don't take care of each other.

He has 340,000 employees who handle services ranging from home mortgages, to college loans, to heart transplants.

Already Gibson has suspended bonuses for all VA executives. And he fired the director of an Alabama hospital. Tomorrow, McDonald will unveil the reorganization part of it designed so that veterans won't have to go to war to get their benefits.

Secretary McDonald: Right now they face nine different organization structures across the country so they don't know where to go and if they do find somebody to go to that person may be an expert in benefits but not an expert in heath care. And we want to create a customer service representative that that person can go to. Secondly they face multiple websites that require multiple user names and multiple passwords and that's not acceptable. We've got to get to one website, one entry point, and then fan people out from there.

Something he's already done is given doctors a raise. VA physicians were making less than most private doctors. It was hard to fill the open jobs and that led to those intolerable wait lists.

Secretary McDonald: Well, this is very personal because I served with a lot of these guys. And we were in very dangerous situations. And anytime you jump out of an airplane in a parachute, you're putting your life in danger. And as a jumpmaster, you're checking that person's equipment. And their life is reliant on yours. That's the kind of relationships you create. Those are the relationships that drive me to do this.