I call it the Attack of the Killer Algorithms as the machines are running all the billing and what you have access to.  This is where the humans come in to make adjustments, but that’s not happening as once “the machines” put the money on the books, it’s like hell to get it off.  Why?  This is how a lot of business works today with connected data.  Once it’s on the books it becomes part of their profit system reporting, immediately and thus this is why it’s so hard for consumers and this is the downside of everything being connected as even though the bill has not been paid 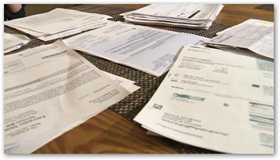 they base budgets on the money and make purchases.  Hospitals do this so be aware.  It’s automated and you have folks collecting money on pay for performance on what they collect and thus so they are not really motivated to remove such charges as they get dinged on bonuses.  Removing and helping the consumer is the “right” thing to do of course and we would all want that but again the business models used today in healthcare don’t allow that to happen.  Wake up folks to the world of automation and connected data and realize that’s why stuff like this happens.

Automation means profits every which way you look at it and you have to realize we do have a Battle of the Quants taking place with insurance companies who have hired armies of them to maximize profits.  Realize when they are modeling for profits, they don’t see there’s humans attached to those numbers either an are only focused on making their bonuses and meeting their goals.  Again this the downside of this as layers of business models actually remove the human connection for Quants and modelers who work with numbers all day long, they are living in “number world”, don’t have have any contact with real consumers and thus so are are removed from any ethical consideration.  It’s ugly and I don’t like it either but I’m writing to tell you this is the cause and effect for all of this no matter way you look at it, it is the Attack of the Killer Algorithms as that what the Quants are using to create those models, math and algorithms.

Again go run and complain to your local or national lawmaker, and the don’t get or understand most of this sadly and yes indeed we are trapped.  We have a huge problem with lawmakers today who don’t understand data mechanics logic and they still think their verbiage in making laws will fix things.  That is a yes and no as laws may be enacted, but if banks, insurers and so on can code around verbiage and determine they will win a case in a court of law with “verbiage” compliance, they do it.  It’s ugly so wake and smell the stink.   Nothing will change until we have some digital centric laws as this cat and mouse game has gone on forever and the models are getting smarter as a way to mathematically squeeze out profits, no matter who it hurts.  I’ve never seen such resistance with consumers to accept this fact as well as lawmakers, but if you want the real story, that’s it so come out of the bliss and speak up.  Short clip below from Mike Osinski from the Quant documentary, what counts is the real world and this woman being saved and taken care of with hear heart attack.

So back on track it’s the patient’s fault now that the ambulance took her to where she didn’t have coverage.  Oh boy we have technology answers, right.  Watch and see as to sell more software someone will come out with a way to look up your coverage next or make an attempt at it, “with software you can do something about everything” is the way the old saying goes and that’s a “virtual” answer, but what happens here is the loss of focus in saving the woman’s life.  This is a big problem today as people can’t tell the difference between virtual and real world values and I talk about that frequently as I observe it everywhere, even coming out of the White House.  That’s why they can’t do much either as they and Congress are confused and lost in virtual values and a proof of concept model that does not work in the real world.

Again her insurer has already paid what the Quant generated contract says and she’s stuck and consumers have no outlet.  This is how you get outfoxed all the time and the Killer Algorithms of such contract generate profit.  Again watch the videos at the Killer Algorithms page and see how you get duped day in and day out and when to be a skeptic, or for started just scroll down and watch the 4 videos in the footer for a good start.

Now the next ordeal if the patient can file bankruptcy is the banks who are now charging people to remove such items on their records.  It’s not fair is it that banks can write off billions and be forgiven but the feed on the consumer this way.  So if you file bankruptcy for medical bills, that still may haunt you forever.  What’s the reason behind some of this?  They can still sell this data about you and when folks want to dig deep they can still find it!  This is yes one more adverse affect of the data selling epidemic in the US.  We need a law to license and index all data sellers, and not just data brokers but banks and companies as they are the big unknowns that repackage your data and make billions doing it.  Again it’s the attack of the Killer Algorithms as this is all done with data.  Visit my campaign below and see what else goes on with how all your medical and other data gets sold and listen to a Congressional testimony.  Again this appears to be above the comprehension and the willingness of lawmakers to attain the proper perception that this going on.

Transparency and Privacy – License all Data Sellers So We Know Who They Are….

You’re not getting anywhere as a consumer as the models that run the algorithms are locked up, proprietary code and they enforce as written in verbiage while computer code runs hog ass wild to come after you.  This is the disconnect today with lawmakers as they do “verbiage” only and think that is the fix, wrong.  You might want to read this entire article from the New York Times about this as we have the banksters and their math models again at work.  Watch video #2 in the footer to understand how they do this.

The problem, state and federal officials suspect, is that some of the nation’s biggest banks ignore bankruptcy court discharges, which render the debts void. Paying no heed to the courts, the banks keep the debts alive on credit reports, essentially forcing borrowers to make payments on bills that they do not legally owe.

At the center of the investigation, the people briefed on it said, is the way banks report debts to the credit reporting agencies. Once a borrower voids a debt in bankruptcy, creditors are required to update credit reports to reflect that the debt is no longer owed, removing any notation of “past due” or “charged off.”

But the banks routinely fail to do that, according to the people briefed on the investigation,

as well as interviews with more than three dozen borrowers who have discharged debts in bankruptcy and a review of bankruptcy records in seven states.

In addition you have the dummies that read and believe everything flawed on credit reports today too and that makes it even more difficult.  It may be part dummy and part company procedure but what’s on that screen, no matter how many errors and what you tell them, is what they use.  Flawed data being used against consumers is a bit problem and I predicted this a couple years ago as well.  If you understand data mechanics and have some sales and marketing in your background you just go through and pick them off.  The Occupy movement was all about this and even the protesters didn’t know what it was but something wasn’t working and now look where we are 3 years later, tons of Killer Algorithms getting your money.  Heck I even had the editor at Forbes write to me at the time and didn’t get this, again the refusal and bliss in acknowledging that all of this decision making is running on servers 24/7, the machines programmed to get your money and deny access.  BD

Megan Rothbauer would rather be discussing an impending engagement, her future marriage and eventually, children. However, the 30-year-old Madison resident is instead scouring the Internet looking for solutions to stave off bankruptcy.

A project manager for a manufacturing company, she is one year removed from a cardiac arrest and the subsequent physical recovery is being dwarfed by a near-impossible fiscal recovery. She was sent last Sept. 9 to the emergency room at St. Mary's Hospital, which was out of her insurance network, instead of to Meriter Hospital, three blocks away, which was covered by her insurance. It's the difference between a $1,500 maximum out-of-pocket expense and the now-$50,000-plus she's facing in bills.

In Rothbauer's case, her insurer, Blue Cross Blue Shield, said it paid St. Mary's 100 percent of its in-network rate or $156,000 to cover part of the original $254,000 bill that she incurred during 10 days in a medically-induced coma and another six days in the cardiac unit. St. Mary's negotiated with Rothbauer to reduce the remainder of her $98,000 bill by 90 percent. This is separate from the bills she received from the doctors, the ambulance, the therapist and others.

Gaines said consumers have little chance to negotiate against the parties in the health care industry as they don't have the necessary tools.