Penalties will apply for those who do not submit their qualifying data and this also covered the clinical quality measure submissions.  Again this gives a little breathing room for now but there’s other issues that need work and follow up as the entire process, much like everything else in the world has been hit with a ton of complexities as well as validity of the models used to continue in the future.  When Stage one 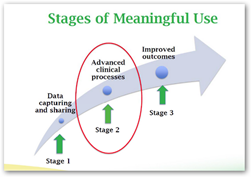 was initiated, it was pretty cut and dry but technology itself moved so fast, the add on came way too fast and quick to be totally absorbed.  The model as created for state two didn’t show that but when it got down to using it in the real world, well that’s when everything comes out in the open as far as whether a model is ok as is or needs adjustments.

The AMA has been calling for the penalties to be halted, which may not be a bad idea at this point as there’s lots going on at hospitals beside Meaningful Use that’s demanding attention these days.  Let’s not forget we have open enrollment right now and even the insurers themselves are having problems with what doctor and hospital are in network and who’s not.  This has been complicated due to the fact that insurers now have armies of Quants constantly reviewing policy models and making changes frequently.  We didn’t have all of this during Stage One of Meaningful use and hospitals have been hiring their own Quants and Data Scientists to keep up.

In October the AMA released their “blue print” recommendations you can read here.  Basically folks, take a chill pill and realize some of the models need some adjusting as otherwise the hospitals will give up if it’s too complex and takes too much time.  By contrast many of the doctors have given up on Meaningful Use two, especially if they have been in the program since the start as the stimulus money is not worth the hassle of attesting.

Again this all has to do with the way the technologies evolved so quickly and you need to have realistic goals, otherwise people just move on and we also have ICD 10 next October and there’s work being done in preparation for that with many deciding to outsource that part of the billing, which is yet another expense and time consuming effort that has to be done by October of next year.  BD

CMS is extending the deadline for eligible hospitals and Critical Access Hospitals (CAHs) to attest to meaningful use for the Medicare Electronic Health Record (EHR) Incentive Program 2014 reporting year from 11:59 pm EST on November 30, 2014 to 11:59 pm EST on December 31, 2014.

This extension will allow more time for hospitals to submit their meaningful use data and receive an incentive payment for the 2014 program year, as well as avoid the 2016 Medicare payment adjustment.

CMS is also extending the deadline for eligible hospitals and CAHs that are electronically submitting clinical quality measures (CQMs) to meet that requirement of meaningful use and the Hospital Inpatient Quality Reporting (IQR) program. Hospitals now have until December 31, 2014 to submit their eCQM data via Quality Net.