This is one of the larger hospital closures in Massachusetts in years.  700 people lose jobs.  Steward Health System took over the 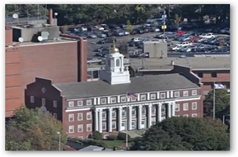 hospital a few years ago along with a few others and pumped money in but the hospital continues to lose money and patients.

Two other hospitals have closed recently in Massachusetts, Radius Specialty Hospital, a rehab facility in Quincy and Roxbury, shut down last month, and North Adams Regional Hospital closed in March.  There was an agreement to keep the hospital open for over 6 years and this closure seems to cut that short two years.  Only 40 of the 196 beds are full presently so patients are either not going to the hospital or going elsewhere.  70% of the patients are on Medicaid or Medicare, both of which pay less than commercial insurance.

Steward Health Care is owned by the New York private equity firm Cerberus Capital Management, which also owns grocery stores like Albertsons and Safeway now.  Even the Unions are not upset here as they can see how dire the situation was and there’s no use fighting this one when the business is no longer there and is not coming back.  An urgent care center will be built somewhere in the area to offer emergency services.  BD

Steward Health Care System said Thursday that it would close Quincy Medical Center and displace nearly 700 workers after the long-struggling hospital finally succumbed to the intense competition for patients south of Boston.

The shutdown, scheduled to be completed by the end the year, marks the biggest hospital closing in the state in at least a decade and the first failure for Steward, the for-profit company that promised to reinvent community health care when it entered the Massachusetts market four years ago.

Steward bought the 124-year-old Quincy Medical Center out of bankruptcy in 2011 and said it poured $100 million into equipment, maintenance, and other upgrades to try to make it profitable. But patients still chose to seek care elsewhere, and the losses at Quincy Medical Center mounted. The hospital is on track to lose $20 million this year.

In recent years, the hospital has faced increased competition from South Shore Hospital in Weymouth, which is planning a merger with Partners HealthCare, and Beth Israel Deaconess Medical Center’s hospital in Milton.