Nobody knows why this happened as the patient was there for stomach issues, not psychiatric care.  He ran out of the hospital and was 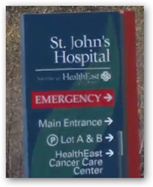 found 3 blocks away.  Police had to subdue him and during all of this and the taser the patient passed away.  The attack was pretty violent as one nurse had a punctured lung, and another has a broken wrist.  The police administered CPR but it was too late at that point.  BD

KMSP-TV A man attacked 4 nurses with a metal bar in a violent rampage at St. John's Hospital in Maplewood, Minn. early Sunday morning, then died after a struggle with police.

Police responded to the hospital just before 2 a.m. Sunday and learned 4 nurses had been assaulted by a 68-year-old patient. The man attacked staff members with a metal bar, then fled the hospital. Police are still not releasing the man's identity, but he lived in St. Paul and was being treated at the hospital for a stomach ailment, not a psychiatric condition.

Police found the patient 3 blocks away. Officers attempted to subdue the man with a Taser, but eventually had to physically restrain him. During the struggle, the man became unresponsive, and crews attempted CPR at the scene. He was later brought back to the hospital where he was pronounced dead. An autopsy is being performed to determine the exact cause of death.