The X-Ray even had the tail in the picture and I can’t recall any of us humans having a tail of late.  The doctor was one that had been under surveillance and the patient bringing in the x-ray of the dog was an under cover cop.  This really adds insult to injury here with the case in how the doctor didn’t even really look at the X-ray.  The doctor had been in trouble before and the LA Times had a picture of the image below.  BD 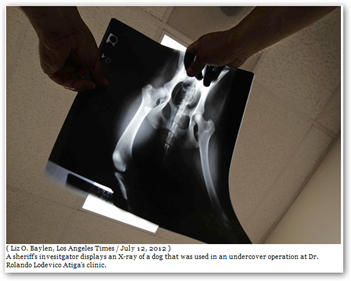 GLENDORA, Calif. — Investigators say a Southern California doctor saw enough from an X-ray to prescribe pain killers to an undercover cop but missed the tail showing it was an image of a dog.

Police and Los Angeles County deputies on Thursday raided the Glendora urgent care clinic of 69-year-old Dr. Rolando Lodevico Atiga after a two-month investigation that included three undercover deputies posing as patients. One of the undercover deputies showed Atiga an X-ray to prove she needed pain killers. The scan of her German shepherd clearly shows the dog's tail. http://www.huffingtonpost.com/2012/07/13/dog-x-ray-doctor_n_1671713.html?ncid=edlinkusaolp00000003