the “Blue Button” and if you are not aware as a member of the military and VA, you can get your medical records by signing up and downloading it.  Below you can read the accounting of one process where a Naval Officer used it at Walter Reed.  This is a perfect example of how having your medical records available not only saves time but also shows the value.  The links below has additional information on how to get started.

To continue on with this story, when the Naval Officer arrived at Walter Reed hospital, the system was down and this happens everywhere but when you see what he did to get his records, he was prepared.  Again having this information with you and accessible just could save your life.  Again this is a great story as unlike most other news articles you read, it’s someone telling you about how great it is from someone who has never used it and we do have a shortage of those in government that will step outside and be a role model to share personal experience for sure, just the so called “experts” that want to tell you it’s good for you and don’t participate themselves and I call them “magpies” in the world of consumer health IT and thus so “magpie healthcare” seems to continue to populate the news with those who don’t participate themselves.  The video below gives you some additional details on how this all works. While this is good for veterans, it’s also important to remind you that if you are on Medicare, you can do the same thing as you have a “Blue Button” there too.  Information is right on the front page of Medicare.gov. 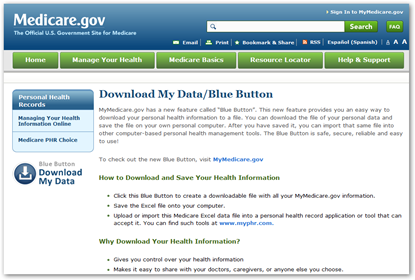 Back on track, the naval officer whipped out his phone and downloaded his data and with it the folks at, Walter Reed, even though their systems were still down, were able to begin his treatment and didn’t run the risk of giving him a drug that could cause issues or problems…it paid off.  Now we all talk about formats of the data and information and some of this is work in progress, but did it make any difference to the naval officer needing treatment..nope.  When needing care the formatting of the data took second place and he had his information he needed for treatment!  Continuity of Care document standards are what makes it possible for the data to be used in a medical record system and some like HealthVault can do that for you and there’s been a lot of work done in this area and it will continue to grow, but for goodness sakes, take that pdf or text document and use it if that’s all that is there and don’t worry about formatting until it becomes available.  In his case the EHR system that could accept or read the data was down anyway.  The link below shows how the Blue Button and HealthVault work together so once you have it there, the rest of your information in HealthVault is combined for a more complete PHR.

MyMedicalRecords also works with the Blue Button and you can import your records into their PHR as well. Again nice to have someone share their story here and we could use a lot more of these on the web showing the value of a PHR (personal health record) and I’m sure in the near future we will see more integrations processes with the Blue Button   Here’s the link to the FAQ section from MyHealthVet that answers a lot of questions on how it works.  BD

Until recently, I took only a passing interest in Blue Button, the Department of Veterans Affairs’ (VA’s) app that allows veterans to download their health records to a computer, mobile device, or jump drive. I realize this probably reflects poorly on me given the fact that I’m a health IT journalist, but I guess I viewed Blue Button more as a nifty feature on the VA’s online patient portal, My HealtheVet, than a game-changer in the world of HIE (health information exchange) and patient engagement. Quite frankly, in the wake of Google Health’s demise, I didn’t think many veterans would even be inclined to use Blue Button. Craig is a former Naval commander that acquired a service-connected disability that confines him to a wheelchair.

On top of that, Craig has a rare (only 500 to 1,000 cases known worldwide) neuromuscular disease called PLS (primary lateral sclerosis). PLS is characterized by progressive muscle weakness in voluntary muscles. There is no cure for PLS, but its symptoms are treated using a ‘cocktail’ or more than a dozen ‘off-label’ prescription medications. “When we arrived at Walter Reed, their system was down and the doctors were unable to access my health record,” says Luigart. “I told them I had PLS, and the physicians really wanted to have a full understanding of the medication cocktail I was on prior to treating me for my head injury. I whipped out my iPhone, logged onto MyHealtheVet, and downloaded my health data — complete with prescription dose and frequency. Without Blue Button, I would have either been forced to wait for Walter Reed’s system to come back online before I received treatment, or been subject to a potential adverse drug event if the physicians decided to treat me without full knowledge of the prescriptions I was already taking.” Plus, does the notion that Blue Button isn’t based on the CCD standard make Craig’s story any less impactful? Nope. In fact, in Craig’s scenario, the EHR system that stored his medical record was unavailable. It was the fact that Craig was able to access and provide physicians with his health record when the EHR system couldn’t that made his account so compelling, and ultimately may have saved his life. CCD compatibility is definitely one way Blue Button can be enhanced to add a greater convenience to providers and patients, but it doesn’t dictate its value. Blue Button does prove one thing — there is a large contingent of patients out there that want control and access to their health records. To date, more than 376,000 unique registered users have downloaded more than 900,000 health data files through Blue Button. Rather than dwell on its perceived weaknesses, the health IT industry would be wise to consider the progress Blue Button has made and improve upon the concept. http://www.healthcaretechnologyonline.com/doc.mvc/the-curious-case-of-blue-button-0001
Tuesday, July 03, 2012
Medically Related , My Commentaries , Other Items of Interest , Personal Health Records , Technology