far this year has not placed the order.  The vaccine, called Immune is 95% of the company revenue.  There are other vaccines produced that are also a single treatment but vaccines from other companies are not necessarily safe for individuals with compromised immune systems and thus this is where the drug comes in to play.  Again this is the only company that makes the vaccine for those at risk and without an order it could run out of money and go away and we don’t want that.  Other sources of funding I’m sure would also be entertained as well.  BD 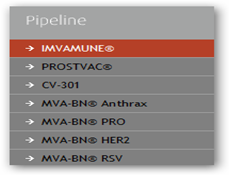 By looking at the pipeline you can see there are also some oncology drugs such as the one in trials for prostate cancer as vaccine.  BD

Bavarian Nordic A/S (BAVA), the largest vaccine maker in Denmark, will need to fire hundreds of workers and shut down a factory if it doesn’t receive an order for a smallpox vaccine from the U.S. government by January, the company’s chief executive officer said Bavarian Nordic relies on the vaccine, called Imvamune, for 95

percent of its revenue, said Anders Hedegaard, CEO of the Kvistgaard, Denmark-based biotechnology firm. It was awarded a $500 million U.S. health contract for 20 million doses in 2007. Without the new order, the impact on the company “would be dramatic,” he said. The firm already has begun firing workers and scaling down production. While government laboratories in the U.S. and Russia hold the only known samples of smallpox, federal agencies stockpile the vaccine amid concerns about bioterrorism. The virus is ranked as one of the greatest potential threats to public health because of its high mortality rate and capacity to spread, according to the Centers for Disease Control and Prevention. http://www.bloomberg.com/news/2012-08-21/bavarian-nordic-at-risk-as-u-s-weighs-smallpox-order.html
Saturday, August 25, 2012
Medically Related , Pharma/FDA News