This is scary story if all in fact here is true about the practice of the doctor.  We all know that doctors reimbursement contracts keep getting lower 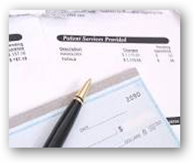 and lower all the time and there are tons of articles on this blog to substantiate but perhaps refusing the insurer’s payments and billing patients was going just a little too far.  She worked in an emergency room and was allowed to bill for the amounts not covered by insurance payments.  Here in the OC we have a ton of complications with insurance companies buying physician's groups.  One day this big surge of subsidiaries with insurers may come back to bite as the algorithms and contracts are getting beyond workability of many.

With all the subsidiaries today that can and perhaps do connect data it would not be out of the question to see this type of activity with one entity of a conglomerate reducing compensation and then notifying another to run in and sell them software, or what ever the fix could entertain and create profits for another insurance subsidiary.

She also has her license at stake and this is unfortunate as obviously if the contracts were correct and ones she could work with I don’t think this would have occurred.  She was pretty aggressive and filed liens and lawsuits against many patients and that’s a little out there.  Sounds like the doctor had a pretty aggressive attorney at work for her as well.  The lawsuit is to recover damages and pay back the patients.  BD

LOS ANGELES — The California attorney general's office is suing a Los Angeles County doctor over her practice of refusing to accept lower insurance company reimbursements and instead billing patients for the full amount.

The lawsuit against South Pasadena physician Jeannette Martello is the first of its kind in the state, the Los Angeles Times reported Saturday.

The California Medical Board is also moving to revoke Martello's license over the same issue, known as "balance billing," which is illegal. Selesnick said that even though Martello was treating patients in the emergency room, the patients were in stable condition. Because it was not emergency treatment, she was allowed to bill them for the amount insurance companies would not cover, he told the Times. In that case, Martello sent back a $3,500 insurance check and then sued patient Bill Buck, his wife and his business for the full amount. http://www.utsandiego.com/news/2012/aug/18/calif-sues-doctor-over-aggressive-billing-tactics/