Home » Medically Related » My Commentaries » Other Items of Interest » Weather Derivatives? Manipulating the Weather for Profit “What in the World are They Spraying” Video Documentary–ChemTrails For Profit

Weather Derivatives? Manipulating the Weather for Profit “What in the World are They Spraying” Video Documentary–ChemTrails For Profit 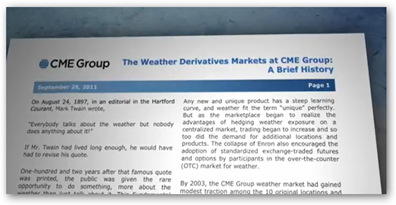 This is very interesting as they have some real experts, including meteorologists with their interpretations.  They also discuss genetically modified foods and seeds and particularly Monsanto to sell more seeds.  Commodities are controlled by the weather with investing so now what, insider information on knowing when someone modifies the weather.  When you look at the weather for the last couple of years it has changed and some very extreme storms have evolved.  Also mentioned here is the growing companies with their tests and so forth with the weather and skies.  We read about the wild quants on Wall Street so is this the next frontier, massive amounts of wealth in just a few hands.  BD

Because of this, we are expecting “WHY in the World are They Spraying?” to revolutionize the environmental movement and awaken millions more around the world to these crimes against nature and humanity.

To help us in our pursuit of making this issue known to all, we ask that you send this link to your e-mail list and also post on all of your social networking sites.    People around the world are noticing that our planet's weather is dramatically changing. They are also beginning to notice the long lingering trails left behind airplanes that have lead millions to accept the reality of chemtrail/geoengineering programs. Could there be a connection between the trails and our severe weather? While there are many agendas associated with these damaging programs, evidence is now abundant which proves that geoengineering can be used to control weather. In this documentary you will learn how the aerosols being sprayed into our sky are used in conjunction with other technologies to control our weather. While geoengineers maintain that their models are only for the mitigation of global warming, it is now clear that they can be used as a way to consolidate an enormous amount of both monetary and political power into the hands of a few by the leverage that weather control gives certain corporations over the Earth's natural systems. This of course, is being done at the expense of every living thing on the planet. http://www.youtube.com/watch?feature=player_embedded&v=mEfJO0-cTis#!

Sunday, August 19, 2012
Medically Related , My Commentaries , Other Items of Interest