This was presented at the Microsoft Imagine Cup in Australia 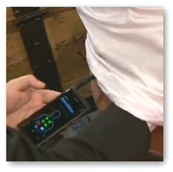 recently and it won the Final of the 2012 Imagine cup.  The Imagine Cup is where students compete in regional areas around the world and the winners advance to the overall finals and I would say this one has great chance.  It uses standards developed by the World Health Organization and uploads the test results to a server which within a minute will return the results with interpretations.  The group is working with a Children’s Hospital in Australia to develop protocols for testing and they have sent the stethomics to hospitals in Malaysia and Ghana and they hope to have it in use there within a year.  They are estimating that the microphone will be a 10th of the current cost of those already on the market as a specific device.  Watch the video to see how it works.  This could certainly work in developing nations and for that matter right here in the US as it doesn’t require a medically trained individual to operate.  BD

What do you get when you combine smartphones, cloud computing, and digital medicine? A new era of healthcare that is bringing powerful technological innovations rapidly to the world.

For example, take StethoCloud, a cloud-based service that turns a Windows smartphone into a digital stethoscope. Created by four students from the University of Melbourne, the goal of the team is to enable early diagnosis of an overlooked childhood killer: pneumonia. Using a specially designed microphone called a “stethomic” that plugs into the smartphone’s audio jack and an app that guides users through the proper method for listening to a patient’s breathing, early testing shows promising at accurately detecting the disease.

And it’s expected to cost only $20. As an ailment, pneumonia is complicated by the fact that it is caused by a host of culprits, like viruses, bacteria, and fungi, as well as substances like dust and gases. So diagnosis comes after the onset of symptoms, which often must become severe before the condition is recognized as life threatening. Hence, early detection has the potential to save many lives. http://singularityhub.com/2012/08/10/stethocloud-the-20-stethoscope-attachment-for-smartphones-to-diagnose-pneumonia/