The president of Ireland spent some time in the US and this is interesting to hear someone on the outside looking in.  Yup we have very 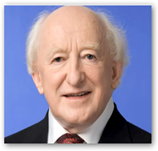 pathetic Congress that is so digitally illiterate they can’t see what’s going on either to create better laws.  The head of HHS and SEC by today’s standards are both way over their heads and we need Executives here that have some technology in their background too.  Nothing personal and I like that fact that they are women here, but step aside before things deteriorate more  and leave with a good reputation because the battle is getting worse and it’s a battle of technology in both areas.  We don’t have time for extra briefings, etc. just watch the news every day and we see how far behind we are.  Hillary Clinton’s job is different as her job is diplomacy and human ethics so she’s right where she belongs.  In areas like the SEC and HHS, people with a law degree no longer fit the bill, it’s the hybrids that understand law and can do some area of technology.  So now listen to this video and see what you think.. Also there’s worse problems of digital illiterates in Congress…the news this week was full of it…in more areas than one as consumers we don’t have much of a chance with folks sitting in denial for sure.

Here’s a good video on that topic and I guess we need the counter part video at this point on “How idiots shape our world” you think?   Either that or maybe I should be writing about “The Attack of the Digital Illiterates?  (by the way you can find this video front stage on every page of this blog if you scroll a little)  BD

Higgins and conservative broadcaster Michael Graham has found a new lease on life on the Internet and is approaching 500,000 views on YouTube. Give it a listen, and you will understand why: Higgins' passionate oratory is irresistible, regardless of where you stand on the Affordable Care Act.

"A social floor below which people would not fall, that is the future," he proclaims. "Even the poorest people in the great country that is the United States should be entitled to basic healthcare." http://www.mddionline.com/article/election/irish-president-critiques-healthcare