competitor than Nuance which for years has been engrained in medical records and other technologies with speech recognition.  Nina will live on a hosted cloud so you will need to be connected and will work on any smart phone if I am reading this correctly.  Nina also will have 40 different voices to choose from.  While Siri has been directed toward the consumer Nina is dressed up and ready to enter the business world.  Nina brings her own API dressings for customization and some other goodies Nina packs a biometric marker to identify users so this should be a bit more secure and of interest to the financial market as well as healthcare.  The US military has a pilot program coming up soon with using Nina for their USAA financial services. The video below will show you how it works and it kind of reminds me a bit of some of the features Microsoft has for their business communications.    You can speak a password so who doesn’t like that.  BD

There is a new natural-language, speech-based virtual assistant in town: Nuance on Monday introduced Nina to rival Apple's Siri.

Nina can be used by smartphone application developers -- or any other type of user who would like to deploy the technology's mix of speech recognition, text-to-speech and voice biometric technology, for that matter. Nuance is offering Nina as a hosted, cloud-based service. 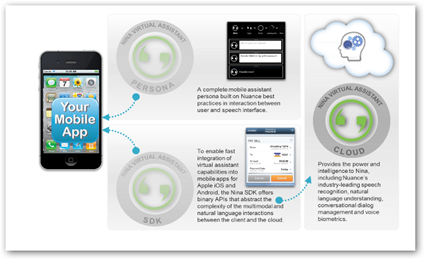 At first blush, Nina and Siri have a lot in common, starting with the voice itself. However there are significant differences between the two.

Nina utilizes a biometric marker -- voice recognition -- to identify users, which should make the service enticing for banks and insurance companies, for example.

In fact, USAA, the financial services provider that serves members of the U.S. military, veterans and their families, is using Nina in its mobile app. A pilot is planned for launch this month, and it will be generally available to all USAA members early next year.

Nina also comes with software development kit and a set of APIs for companies to allow customization, which also sets it apart from Siri. Using the SDK, companies can build voice capabilities into iOS or Android. The available source code lets users create a virtual rep who, among other activities, can appear to be awake, asleep, listening, processing, or answering a request.

The Nina Virtual Assistant SDK consists of three components, including binary APIs that provide access to the speech recognition, text to speech and natural language understanding; source APIs that provide mobile app developers with access to customize the persona; and source code of Nina Virtual Assistant apps and functions. These, such as the Nina Banking Assistant, offer templates and tasks for store location, bill pay, account information and other banking-related queries. http://www.technewsworld.com/story/75838.html