MMRGlobal Creates A Team of Former NFL Celebrities to Educate Consumers on the Benefits of Personal Health Records–Free Trial Offer For Those Signing Up With a Team Member At MyMedicalRecord.com

Ron Brown, the current Director of business affairs for retired NFL players in southern California will lead a team to recruit athletes and celebrities to join the MMRPro Sports Team.  MMRGlobal team members will be the ambassadors in a campaign to educate on the importance of having a personal health record today and will be making appearances at hospitals and other named locations.  If you read at the Medical Quack often enough then you may have stumbled on to the 400 plus posts I have on PHRs that date back to the beginning days and it has progressed tremendously since that time.  Below is one example of the special pages created where a message is given by a team member and their mission and message about PHRs. 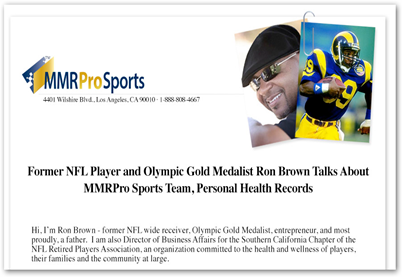 A short while back I had an article to where even at Walter Reed systems go down and this officer was able to give the doctor his medical information when the IT system at the hospital went on the blink with his cellular connection and his PHR and this also makes a case for the “Blue Button” which can also be obtained and stored in MyMedicalRecord PHR.

For physicians there’s also the MMRPro product which allows for doctors to sign up and have the ability to securely communicate with patients and you both phone and text capabilities here.

MMRGlobal is a sponsor at the Medical Quack and you can always find the link to MyMedicalRecords at the top of the page.  This is good thing as I see it as it sounds I have some good credible help out there besides just this blog on promoting the use and benefits of having a PHR <grin>. BD

Ron Brown, Olympic Gold Medalist and former NFL wide receiver for the Los Angeles Raiders and Los Angeles Rams, who is currently Director of Business Affairs for the Southern California Chapter of the NFL Retired Players Association (RPA), to recruit athletes and entertainment personalities to join the “MMRPro Sports Team.”  Team members will represent MMRGlobal as ambassadors of health in a campaign to educate the public on the importance of having a Personal Health Record (PHR), particularly in families where children are active in sports.  MMR is a leading provider of Personal Health Records for consumers and electronic document management and imaging systems for healthcare professionals through its MMRPro product offerings. Team members will sign up fans for 15-day free training trials of the Company’s MyMedicalRecords Personal Health Record (www.mmrvideos.com), a secure, easy-to-use online tool that enables individuals and families to safely store all their medical records and copies of other important documents, such as copies of insurance policies, photo ID and immunization records, and access them anytime from anywhere, especially in an emergency.   Team members will be asked to participate in presentations on the importance of having a Personal Health Record at children’s hospitals, regional health fairs and other events where they are scheduled to appear. Former NFL players currently participating on the MMRPro Sports Team include David Hill, tight end for the Detroit Lions and Los Angeles Rams, Anthony Miller, All-Pro wide receiver for the San Diego Chargers, and Mike Harden, who played safety for the Los Angeles Raiders and Denver Broncos. Other players will be announced as they are added. Each MMRPro Sports Team member will have a landing page where their fans can go to sign up and begin the process of setting up a MyMedicalRecords account that is bilingual in English and Spanish and covers up to 10 family members, including pets (http://mmrprosports.com/ronbrown/). http://phx.corporate-ir.net/phoenix.zhtml?c=178404&p=irol-newsArticle&ID=1728882&highlight=