Medically he seemed to have a bit going on with recovering from 2 hip surgeries and a bump on the head from an air flight.  One more personality the victim of heart disease.  I think we are living in a very stressful world today.  BD

Beloved TV pitchman Billy Mays most likely died of heart failure, not from being hit on the head during a rough landing on a US Airways 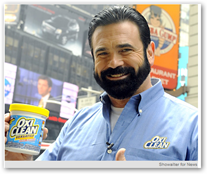 The autopsy done this morning reveals no evidence of head trauma or drug abuse, said Medical Examiner Vern Adams. A full autopsy will be completed within eight to 10 weeks.

Mays, 50, was found dead Sunday at his Tampa home. The brash but buoyant salesman became a pop culture icon for pushing household products like OxiClean and OrangeGlo.

The pitchman's death came just hours after he got hit on the head during a rough landing on a flight from Philadelphia, leading to speculation that the bump killed him.

But the autopsy showed he had hardening of the arteries. He was taking pain medication after having two hip replacement surgeries, but those pills did not contribute to his death, Adams said.