folks get the wrong idea, as a matter of fact I used to write code, and thus going back to my roots the visualization is there along with the past where I spent over 25 years as an outside sales representative, calling on and working for Fortune 500 companies.  I thought I should mention this as it might help make a little more  sense of my opinions.  I have no special talent but rather am just wired this way with being logical and not sitting in denial as to what is really happening.  So what about devaluating algorithms?  Its needs to be done and I might also add that we will always have both open source free software and software that you pay for as we need both.  You take a very successful company like Microsoft who creates software for a profit and they have done a great job and develop software solutions that they sell from the business enterprise side to the consumer area, and it’s pretty much affordable.  They get boring as folks say on the stock market, but they are steady and stay with their plan and also have some open source software too.  Apple, same thing with the exception they are into the hardware side with devices, as we all know the Ipad.  Both companies do a great job along with many others out there.  Where the rub comes in today is the stuff that runs on the web for a big part,

the social networks for a big one.  Now I like them and use them for sure, but when you look at what Wall Street has done with valuation, well flash back to mortgages if you would, same thing rolling code and math beyond the average consumer’s ability to understand.  I’m totally fair about all of this and see the need and use for social networking but when you have banks and others that purposely take and roll up a valuation on intangibles that are nothing but a bunch of code and algorithms with no physical item you can put your hand on, we have an imbalance.  “How much is that algorithm in the window worth?” This has to be the dumbest money making marketing scheme that has ever come along with putting such outrageous values on some sticks of code .  I am not discounting the folks who created the platforms a need to make a great profit and money as they deserve it, but not to the billions that we are seeing today.  People are naïve when it comes to a lot of this.  I read where Facebook is actually going to put in a data center and there’s finally a tangible of some sorts, but really what do you get?  We talk about the need to revive manufacturing?  How is that going to happen when companies can grab a few programmers, get a cloud and write some data mining code to capture?  It’s captured, mostly free taxpayer data, then queries are run and the data is formulated in table for sale?  Now once that is set up other than a few modifications here and there, there’s few employees needed as this is pretty much an automated process.  I’ll use my model case here too with the billions that companies make with an unlimited resource of data on the web to make money. If you look at Walgreens in 2010, they stated their intangible income of selling data was just a bit short of $800 million, so do they make that much a year selling prescriptions?  I don’t know but I would put a guess out there that the data revenue couple be toppling the drug side of their business and if not now, soon.  So what do you get as an investor with these algorithms as a

shareholder?  Do you have a certificate of algorithms that you own part of?  Can you see them, touch them, know what the programmers are going to do next, of course not.  Only your programmer knows for sure and even that is not guaranteed as things change quickly.  So as a shareholder, what do you have here?  It’s a big gamble on computer code over the web that does stuff?  Web algorithms have more value than food, and sadly when I’m hungry I can’t eat an algorithm can I?  So why is it that food and other commodities that we need to live are rated as values much lower than these social algorithms? On the same hand when I’m sick, an algorithm can certainly help diagnose but it’s not going to cure me as I need something tangible, like a drug or device maybe, so again these social algorithms and the madness created by Wall Street with behavioral analytics if off balance.  We need both tangibles and intangibles but if we don’t get smart enough to learn how to use both in harmony we are all going to suffer. Folks that are into math and physics know this and they also know that queries can return both accurate and desired results.  The two should be the same but they are not always, and that’s the problem.  This is why I started my series by accident called “The Attack of the Killer Algorithms” and it has a place on the front page of the Medical Quack now to help educate consumers on the power of formulas and math. 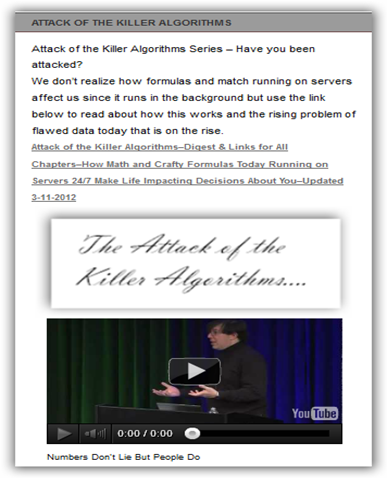 Actually if more economists would collaborate with more mathematicians I think we might have a little better forecasting going on as many economists sometimes get those “flawed” reports and rely on antiquated methodologies of math too, so bump head guys and see what collaboration might do.  Big business and banks use technology against you when you are naïve.  Also with all the aggregation services taking place out there, which is nice as far as gathering information, data is is getting flawed and less reliable for accuracy and that’s a fact.  Many do not know how to work with flawed data and use it more in a black and white perceptive vision to make decisions and when that happens insanity begins.  Here’s 25 articles I wrote with 25 examples and by reading here you might understand a bit more about this.
You can scream and holler all you want but until the algorithms on the servers that run about 90% of what we do anymore get changed, then nothing happens. 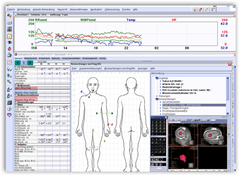 software used and that’s not a bad idea.  Everyone talks about how far behind healthcare is, but on this topic they had everyone beat as all medical records systems used to gain stimulus incentives are “certified” and that’s a good practice by all means.  It means some of the math gets looked at.  It is not 100% as even GE who software and algorithms were certified had to have doctors resubmit as they had “flawed algorithms and data issues”.  This was their big star ship product too with EMRs.

After reading here so far, do you not think there’s a need to look at the math?  It moves money and algorithms work behind the scenes 24/7 making life impacting decisions about us and either gives or denies.  Health insurance companies rely and live off of their algorithms for a number of things besides paying claims.  United Healthcare has a division that is nothing but software and algorithms that used to go under the name of Ingenix but has now been renamed Optum.  How about their algorithms over the years?  Right now they are in the process of sending checks out to doctors to reimburse them for 15 years of short payments on out of network charges, and how was that done? It was the algorithms so again they give and they take away and Andrew Cuomo caught them on the flawed math.  Check this guy out who ran flawed code for a couple years and provided it to clients and he knew it calculated incorrectly.  The tech folks that worked for Madoff completely rolled over and told us what went on.

Here’s an example of a healthcare algorithm that denied care from a year back.

point of aggregation why are they rated so high with the cats at Wall Street building another “data trap” so brokers and others make money and the rest of us all get more money taken by other algorithms that are designed to do that in one way or another.   Killer Algorithms are putting small businesses that you and I rely on out of business for the sake of providing more data to sell on the web…read this:

Back in January I wrote this about Richard Cordray hoping that he knows math and formulas and watched on a Sunday at a huge amount of federal agencies that were reading this so maybe someone found something in here worthwhile as it is the truth.  We are screwed if he only goes before out digital illiterate Congress to try and drill some of this in.  Believe me I talk with folks all the time to educate and get a lot of deaf ears from those who don’t want to learn or hear and would rather sit in denial just from my tine part of the world.

Three years ago I wrote this piece a bit in jest but boy we need something like this in place.


“Department of Algorithms – Do We Need One of These to Regulate Upcoming Laws?

realize that big business is eating our lunch nothing will change.  We need to put “real” values out there again and not just base an entire economy on algorithms so “devaluate the algorithm” it is.  Believe me there’s still plenty of room for profits with a devaluation process and nobody’s will go broke but we could see the wealth redistributed a little more equally and inequality gaps begin to close in.
If you want to dig a little bit further, then Chapter 17 of the Killer Algorithms series is just the place as I have a suggestion on how to setup taxing the data sellers, again why should corporations like Walgreens make just under $800 million selling data.  Just think how much income the banks, hedge funds, Facebook and you name it have on cash on hand with this “easy money” that comes off our backs. We all worry about devaluating the dollar but doing the same to the algorithms will accomplish much more as the valuation of the dollar is all based on economic algorithms.


Start Licensing and Taxing the Data Sellers of the Internet Making Billions of Profit Dollars Mining “Free Taxpayer Data”–Attack of the Killer Algorithms Chapter 17 - “Occupy Algorithms”– Help Stop Inequality in the US DEVALUATE THE ALGORITHM AND BRING SOME BALANCE BACK TO THE WORLD OF THE TANGIBLES BECAUSE THAT’S WHAT WE EAT AND LIVE IN (HOUSES).  The audio below is well worth listening to as Professor Siefe back up just about everything you have read here and discussed the “Dark Arts of Mathematical Deception” his book.


“Numbers Don’t Lie, But People Do”–Radio Interview from Charles Siefe–Journalists Take Note, He Addresses How Marketing And Bogus Statistics Are Sources of Problems That Mislead the Public & Government

I haven’t figured out how to serve an algorithm for dinner yet or how to wear one, much less talk to them:)  By the way this is “behind the scenes” what the Occupy Movement is all about if you have not figured that one out yet.  BD
Wednesday, April 11, 2012
Medically Related , My Commentaries , Technology