I didn’t even know these existed and it sounds like the services and the centers are like a cross between a full ER and part nursing home characteristics as all the beeping machines are not present.  The article in the Times states the Geriatric ER rooms are more like clinics and they have some special features like non skid floors. 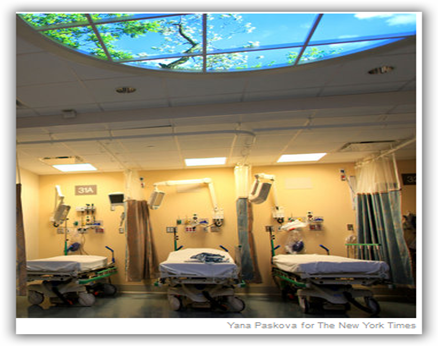 The part that they all talk about here though as far as aesthetics is the ceiling light that looks like a skylight that does day and night.  I think anyone could appreciate that to know what time of day it is.  I have seen the skylight in a couple hospitals here in California as well but not necessarily in the ER room and think they would be welcome anywhere.  The patients have a touch screen tablet to where they can call the nurse or listen to music too.

Falling in the ER room was a big problem and thus this lead the doctors to try something different.  BD

Holy Cross Hospital in Silver Spring, Md., opened one of the first geriatric emergency departments, which it calls a seniors emergency center, in 2008, and its parent organization, Trinity Health System, runs 12 nationwide, primarily in the Midwest, and plans to open six or seven more by June, a spokeswoman said.

Dr. Mark Rosenberg, chairman of emergency medicine at St. Joseph’s, said he had consulted on more than 50 geriatric emergency rooms to be opened across the country, from Princeton, N.J., to California, overcoming initial resistance from doctors and nurses who saw assignments to the units as scut work.

“ They thought it was a bedpan unit, focused on nursing home patients,” Dr. Rosenberg said. “When they finally realized this was the unit that gave better health care to their parents and grandparents, they jumped onboard.” At Mount Sinai, all arrivals go through triage in the regular emergency department and are sent to the geriatric department if they are over 65, know their name, were able to walk before the day of the hospital visit and are ranked 3, 4 or 5 on a standard emergency severity index of 1 to 5, with 1 being the sickest. Someone with a broken hip would probably qualify, but someone with an acute heart attack would most likely have to be stabilized in the regular emergency room first, said Dr. Kevin M. Baumlin, the vice chairman of emergency medicine, who founded the geriatric emergency room. Volunteers interact with patients to keep them alert. The artificial skylight, which turns dark at night, is intended to combat “sundowning” — agitation and confusion at the end of the day. “I have to say I thought it was the hokiest thing I ever heard of, but it turns out it’s a big satisfier,” Dr. Jagoda said. http://www.nytimes.com/2012/04/10/nyregion/geriatric-emergency-units-opening-at-us-hospitals.html?_r=1&pagewanted=2