The product is not legal in all states so check the Yellow Jacket site to see if it is legal to own in your state.  This is pretty wild, a case that is s stun gun.  It has safety switches built in so it doesn’t accidentally go off as well. 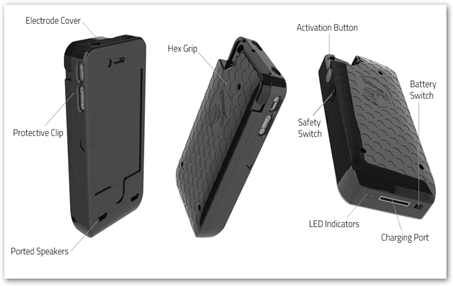 Here’s a short video on how it works.  With all the crimes against women today with being over powered this could be a real tool for safety.  Of course it has to be used as intended for protection as we have already seen in the news stories of regular stun guns creating medical conditions, such as heart attacks, etc.  If someone is trying to attack you, of course we are not worried at that point as they shouldn’t be doing that to begin with.  We hear of doctors being attacked and some killed as well so maybe something for the office with staff members trained how to use in case of an emergency?  BD

Former Army soldier Seth Froom vividly recalls when he was robbed at gunpoint in his own house in 2011. With his face to the floor and an iPhone in his hand, he watched helplessly as his home was ransacked.

"I kept thinking what I could have done to stop this," said Froom. Two years after that traumatic event, Froom and his college buddy Sean Simone had invented a solution that has the potential to make millions -- an iPhone case that doubles as a 650,000-volt stun gun.

Yellow Jacket, the company Simone and Froom founded, has sold thousands of the cases since February through retail stores and its website. The cases, which retail for $139.99 each, aren't sold in states where stun guns are banned, and customers must be 18 or older.

They soon needed more startup capital. They approached crowdfunding site Kickstarter, but were turned down "because our product is a weapon," said Simone. In June 2012, they took their campaign to rival Indiegogo, and in 45 days, reached their target of raising $100,000.