Home » Insurance » Medically Related » My Commentaries » Lack of Modeling and Algorithm Sleuths and Stalkers In Government, Part of Why We See Such “Silly” HHS and Congressional News About Financial Donations And/Or Solicitations…

This is silly news for sure and again if we had better technologists employed at some government levels, then news like this would cease to become headlines.  I have said it many times here that complex and ambitious models have been used by insurers for years, long before Obamacare was inked and they do it for profit.  You can almost read at least one story a week in major news publications about this topic and they all say the same thing that complexity leads to bigger profits, so if you have missed it, here it is stated once again:)

Wall Street and Other Financial Institutions Spending Big Bucks Teaching New College Graduates How to Use Spreadsheets–Is This An Emergence of “Mini Modelers”Without Borders?

If we had smarter modeling talent that held some of the “for profit” organizations accountable then we wouldn’t have seen this kind of news with “asking” for donations, which is kind of silly anyway as when major insurers are backing out of exchange participation, chances might be slim

and none that they want to kick in money unless there might be a serious tax write off available.  This is where things need to go for the future and we have seen it on Wall Street and in healthcare so time to stop taking swords to a battle where the other side is using machines guns for a simple analogy.  We keep doing this over and over and it plays out in the form of big OMG articles in the news.  It’s all about math and the models used to ensure they are not lying and reducing or expanding risk for profits.

Last week I wrote my opinion on the massive “spreadsheet” training on Wall Street, why?  They want mini modelers..it is what it is and they can sell their “machine technology” created models too, so again what is out there on these SaaS models and what are they creating…hmmmm…”looks like a good model, has square root in it, must be good” is what occurs with folks who are not mathematicians.  We have models galore in healthcare and with health insurance and the insurance industry are the kings of the trade in Health Payer IT areas.

These models move and take your money.  Have you been duped lately?  I call it Algo Duping and it occurs all the time with studies and media that we read.  People smarter than me will tell you how this works and there’s one interesting point in the video at the link below that goes back to a US nuclear weapons assessment where the wrong model was used, way back to Reagan and it’s still out there doing damage today.  The video has a lot of healthcare issues as well, and will make you think about what you read out there today.  Scroll down to the footer of this blog for more videos that I added from what I call the real experts with math that tell you exactly how this works in a way the layman can understand.

Context is Everything–More About the Dark Arts of Mathematical Deception–Professor Siefe Lecture Given at Google’s New York Office–Big Healthcare Focus".

So for this HHS story we have what I consider “no context” here, just more silly OMG news and distractions that are not getting us or Congress anywhere.  Lobbyists and other sorts just love it though as it keeps folks distracted from the modeling and subsequent algorithms that run on servers 24/7 that move and take your money, and sell your data for billions in profits.  Feel screwed, well you should as that’s the reality of what goes on behind closed server doors out there.

Even Australian bankers here in this post are telling you that half of all the financial analytical investments in software will be a waste as with spun marketing you can’t always tell the good from the junk.

What do I know though as a former developer when I sad that Health IT would eat up non tech executives…happening though and not just at HHS, add DOJ and SEC to the group, it’s just so very obvious today.  If you happened to catch the Frontline video about “The Untouchables” it was so obvious that the investigative efforts of the DOJ from what was spoken by DOJ Manny resembled “sling shot” type of attacks if you will, very sad from what I heard.

So until we finally come to terms with holding banks and companies responsible for the accuracy and ethics of the tools they use for profits and get below the soap opera surface, all of this will continue and the US will slide down the tubes as the folks at the top have technology, talent and money to keep government bliss with modeling and algorithms under their thumb for a long time, so enjoy more witch hunt stories 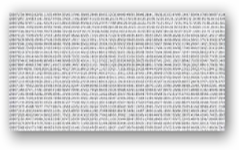 in the news as that’s what you are going to see until we get some of the right folks in the right places, sad to say.  A clip from the HHS soap follows below along with the Congressional OMG material to suck you in to the inflated importance of this whole topic…sad but this is about the best we can seem to do of late.  If you wait long enough and follow marketing trends, someone will put out a poll for you to vote on this too…lol…it’s just keeps the distractions moving.  Polls are mostly just trying to sell you something be it a product or an idea or political  view and can be powerful in the OMB world:)  BD

"I have made two calls involving funding, to Robert Wood Johnson (Foundation) and H&R Block, neither of whom are under the regulatory authority of our office," she said in testimony before a House of Representatives oversight committee.

Sebelius said she did make phone calls on behalf of the group, Enroll America, to healthcare companies Johnson & Johnson, Ascension Health and Kaiser Permanente, all of which the department regulates, but she did not ask them for financial donations.

She also said she never discussed her actions with the White House but made the calls at the request of Enroll America, a group that represents a range of healthcare businesses and interest groups working to help educate the public about the benefits of the law, officially known as the Patient Protection and Affordable Care Act.