Home » Insurance » My Commentaries » Other Items of Interest » When You Have ALEC, Who Needs Lobbyists…Teaching State Law Makers How To Cash in on Models for Profit With Private Industry…Update from Bill Moyer

When You Have ALEC, Who Needs Lobbyists…Teaching State Law Makers How To Cash in on Models for Profit With Private Industry…Update from Bill Moyer

With ALEC you can change the world without ever having to go to Washington, find out what this is all about if you have not seen this before. 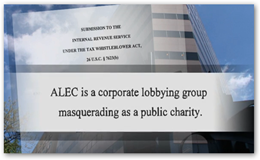 This is a quote from the video and there’s a big focus on Wisconsin here and their influence in the state and with Scott Walker.  The Koch brothers were the largest investors behind his campaign.

This is the secret “wine and dine” lobby bill if you will.  The governors of Arizona and Wisconsin are big ALEC members.  Watch the video and see how all of this works.  You can find big representation from the NRA here.  Many companies in the last couple of years have left their memberships in ALEC.  ALEC continues to find new friends.  Arizona introduced an ALEC accountability bill.  This is also how many insurers have gained power at state levels.  This is all done in secrecy.  With all the recent NSA controversy I think ALEC controversies will continue to arise.

ALEC still calls for privatizing Medicare.  Wendell Potter is referenced here to his shock at the information and politics being used and he was on the other side for years and had no idea how deep this is.  United Healthcare has a big presence with ALEC and guess what, their subsidiary company, QSSI is build the new federal data hub that will connect at first insurance exchanges to the IRS, Immigration, Social Security and more.  Two weeks after HHS awards the contract Untied buys the company, ALEC related?  Now almost all the big commercial insurers are not even going to participate in the state health insurance exchanges, planned?

And they seem to have the same USB drive problem that Booz Allen is having relative to NSA matters with Snowden and his access as a system administrator.

On a side note here it was in the news that Nancy Pelosi was “booed” at her speech when she mentioned Snowden and I like her, but hence 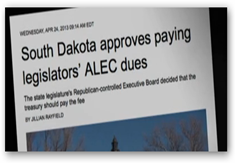 she did not know her audience in San Jose of very high intellectual people who build technologies, some like what gets sold to the government and of course they were offended as the technologists don’t get the credit a lot of times for their intelligence and what they know and how they created models and algorithms that control money.  ALEC as you can see by watching the Bill Moyer video is right in there, teaching modeling for profit and the feds end up once again on the short end of the stick and it comes down to money and digital illiteracy.

Sorry Nancy, but next time assess the crowd you are addressing and the high level of intelligence that functions beyond the walls of Congress and that message can go to all of them both parties.  Time to wake up.  Do yourselves a favor and get educated and restore the Office of Technology Assessment so you are better informed on how technology is shaping the world and how Algo Duping with models that lie or are not accurate fleece all of us.  Corporations model and model and model and ALEC appears to be right in there and again nobody is asking any questions as to the validity or accuracy of such.  BD

Here’s some additional links on ALEC….

A national consortium of state politicians and powerful corporations, ALEC — the American Legislative Exchange Council — presents itself as a “nonpartisan public-private partnership”. But behind that mantra lies a vast network of corporate lobbying and political action aimed to increase corporate profits at public expense without public knowledge. 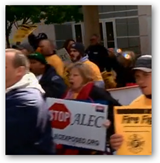 In state houses around the country, hundreds of pieces of boilerplate ALEC legislation are proposed or enacted that would, among other things, dilute collective bargaining rights, make it harder for some Americans to vote, and limit corporate liability for harm caused to consumers — each accomplished without the public ever knowing who’s behind it. Using interviews, documents, and field reporting, the episode explores ALEC’s self-serving machine at work, acting in a way one Wisconsin politician describes as “a corporate dating service for lonely legislators and corporate special interests.”

Monday, June 24, 2013
Insurance , My Commentaries , Other Items of Interest