UPDATE:  It was a technology issue on the data stamp that made the change as was explained on Wednesday but nobody could answer on the floor as why this occurred.  An algorithm entered a default date as it was called, but again nobody there having a quick response and with the status of the use of technology and data today, everyone speculates:)

This is certainly more proof with this type of action of not understanding automated technology and how it works.  It is actually funny and sad at the same time when you think of this is the mentality of some lawmakers today, to try to cheat.  It’s all documented and again I keep saying

that “abortions” are the default fall back topic of those who are not adequately digital literate and this kind of proves it when you have a live broadcast with folks that are digital literate watching for some kind of altering of real time events.  I would call this a  case of “Redneck Killer Algorithms” as they tried to alter a process that was handled by a process smarter than they are.

It’s bad enough to attempt this and much less when the whole world is watching and someone is going to catch it and they did!  No wonder Algo Duping survives with political lobbying issues.  I do wonder who was the non literate “brain child” that thought this would fly?  It makes all of them appear to look like a bunch of old angry men on a mission to “control something”. 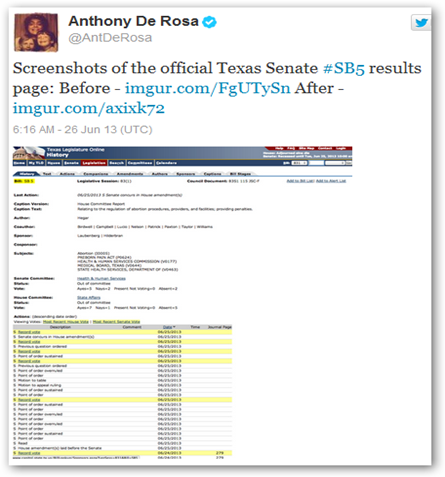 Anyway I first made note of this phenomena two years ago with where the focus was with all of this.  In my personal opinion

, I have never seen so many lawmakers that detest and avoid education with technology and I guess more proof as such not to mention embarrassment of exposure like this is needed?  Have we not seen enough?  This is a big duh!  You might say the Texas legislature was attacked by their own Killer Algorithms they tried to institute.

In Washington too, they could use some help and it’s time once more to plug the Sunlight Foundation and their cause to restore the Office of Technology Assessment to help and educate those making laws

, and hopefully eliminate further showings such as this one that occurred in Texas, aka “Redneck Killer Algorithms”.  I’m not the only one out there watching by any means, and a public exposure of such is pretty scary and who knows what legal ramifications may come out of this but again this is the OMG abortion group at their best and if this is the best, I shudder to see what the worst is.  Visit the Algo Duping page for some real educational videos from some people who are a lot smarter than me to read up on how math, modeling, (modeling for inequality) and steroid marketing is shaping and attacking those who are not informed and see how easy it can be to get sucked in to models and reports that lie and are generated for profit only.  BD

In a desperate effort to pass a controversial bill that would shutter abortion clinics in Texas, a slew of Twitter sleuths, including Circa's Anthony De Rosa and former Reuters social media editor Matthew Keys, discovered that the state legislature altered official state documents to show that the vote was passed before the midnight deadline.

In actuality, the Texas state senate did not pass the bill, SB 5, in time—thanks to defeaning cheers from the gallery from supporters of State Senator Wendy Davis, who spent more than 10 hours filibustering a vote.

"Over 170,000 of us watched the Texas GOP [on YouTube] *Break the Senate rules*, and mainstream media is ignoring that fact," writer Wil Wheaton tweeted.