From reading this article, if the website says they are Canadian, there’s 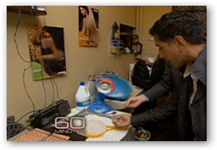 a good chance they may not be located there, but rather in China, India, Turkey or other countries.  This is a good time to take a look at the 60 minute report and how much money the counterfeit drug companies make.  See how Pfizer has people employed to help catch them.

Every pharmaceutical company will take pills back and test them for you according to the video.  We all might remember the fake Avastin drugs that made it’s way to the US and the heparin a few years back.  This might be an omen to starting bringing some drug manufacturing back to the US.  BD

At some locations, FDA and customs agents use handheld scanners with ultraviolet and infrared radiation to detect suspicious packaging and ingredients. Confirmation of whether a product contains fake ingredients must be done in a laboratory. The scanners are in use at a handful of locations that handle a large volume of imports such as the Los Angeles International Airport.

The FDA said it has shut down 1,677 sites for selling counterfeit or substandard medication, or for selling drugs without appropriate safeguards. Other sites received regulatory warnings. Officials said they also arrested 58 people and seized more than $41 million worth of illegal medicines.

Several sites had sleek interfaces and names that could easily be confused with legitimate pharmacy retailers. For example, the FDA shuttered Walgreens-Store.com; the well-known drugstore chain's website is actually Walgreens.com.

The most common scams advertised popular drugs such as Viagra, Levitra, Celebrex and Avandaryl. The recent crackdown, labeled Pangea VI, involved the cooperation of more than 100 countries, according to Interpol

"The fact of the matter is very few, if any, of these sites are actually based in Canada or (are) Canadian," Catizone said. "In fact, they are located in China, India, Pakistan, around the world."

The National Association of Boards of Pharmacy's website features a list of approved online pharmacies as well as those to avoid.