Home » Medically Related » My Commentaries » Other Items of Interest » Hoag Hospital Protest Scheduled Due to Halting of Elective Abortions That Came Along With St. Joseph’s Affiliation, Here We Go Again…

Hoag Hospital Protest Scheduled Due to Halting of Elective Abortions That Came Along With St. Joseph’s Affiliation, Here We Go Again…

Are you just downright tired of this topic?  I respect everyone for their own beliefs but for goodness sakes the distraction and the publicity it allows digital illiterate lawmakers is phenomenal.  Hoag is a great hospital and I have done some volunteer work for them myself at their annual Toshiba golf classic.  Hoag is Presbyterian and St. Joseph’s is Catholic so here we go again.  If it isn’t the politicians it’s the hospitals.

In the meantime we have this thing with money called modeling and algorithms for profit moving all the middle class money to the 1% and that takes a back seat to this?  It’s not like abortions are an investigative procedure either that requires a lot of additional research?

We went for years without all of this and now it’s back and disrupts and distracts from actual technologies that should have attention before this.  I have pretty much figured out that lawmakers who feel uncomfortable about discussing technology items as they relate to laws and bills today have absolutely found what they seem to see as a “safe haven” to show they are discussing something of real importance and just drag everybody down with them.  Worse yet, the lawmakers won’t even help educate themselves on technology and fight it tooth and nail, I guess so we can spend more time talking about abortions.  They won’t even mention restoring the Office of Technology Assessment to help them make better laws, so what’s up with that?  Just read the news with what is said and boy do they need it. 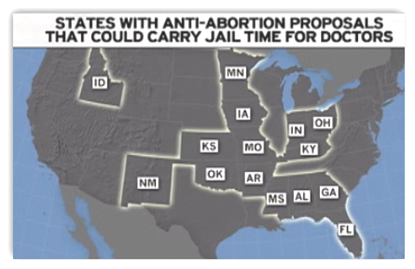 Been Algo Duped lately?  You can watch the 5 videos there to get a good perspective on what’s going on with servers 24/7 making life impacting decisions about all of us that deny and move money.  I also have a few of them in the footer of this blog.

I would rather see all the folks protesting getting educated there and the folks making the decisions to not allow elective abortions read there too and also get educated.  It might put a different perspective on priorities.  If we keep this up we might not be able to afford to have these abortion conversations much longer, but it’s time for paradigms and reality to come together I think. Again I respect everyone’s personal decision but the distraction and disruption all of this causes is putting items on the back burner that need to be addressed with priority.  I guess this study about math giving people real physical pain must have something to it as it certainly is scaring many lawmakers into long dissertations about abortions:)

Anyway after reading my rant and perhaps watching some videos addressing more pressing matters that will in fact either allow us or disallow us to financially keep having these wasted conversations, well you decide.  I’m tired of it and after years of good family planning and safe education for abortions, this is just one of the biggest distractions I have ever seen, and again as noted, it’s a haven for digital illiterate lawmakers to slush in as they “have” to control “something”.  BD

Hoag Hospital’s decision was announced after it partnered with a Catholic healthcare provider, though administrators said the policy change on abortion was a business move by a hospital that performs fewer than 100 abortions a year.

Just the same, the decision to halt elective abortions has drawn fierce reaction from physicians, donors and women’s rights advocates.

Eight physicians affiliated with Hoag Hospital issued a public statement saying they strongly oppose the policy change and at least two donors vowed to discontinue financial support, while a local Democratic club plans to stage a rally outside the hospital Thursday evening.

Anti-abortion advocates, meanwhile, say they are organizing a counter-protest.

“The No. 1 thing a hospital has to have is credibility, and I think they're taking a risk ...” said Suzanne Savary, president of the Newport Beach Democratic Women's Club. “I don't think women's groups are going to let it go away.”

Robert Shelton, former city manager of Newport Beach and a longtime resident, said he is withholding his financial support for the first time in 50 years.

Thursday, June 20, 2013
Medically Related , My Commentaries , Other Items of Interest